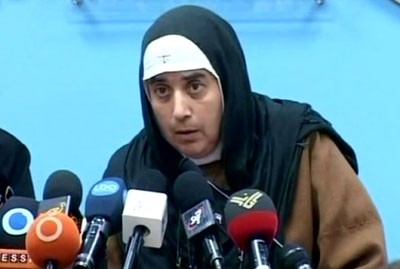 BEIRUT (SANA, 19/11/2011) ~  Mother Agnes Merriam al-Saleeb, head of the Catholic Media Center team which visited Syria and witnessed the reality of the situation on the ground, said on Friday that there’s an environment that is nurturing and is in charge of nameless gunmen possessing advanced firearms and ammo, instructing them to vandalize and terrorize citizens and security forces in Syria.

In a press conference attended by Italian, Belgian, French, Spanish and US journalists who visited Syria, Mother Agnes pointed out that the Catholic Media Center was the first media delegation that visited openly the hotspots and hospitals and witnessed what was being inflicted upon the security forces and the army.

She pointed out that the Center has a list of the names of the actual victims who were murdered, butchered and dismembered for no discernible reason, adding that the images of those victims were used later in media setup claiming that security forces killed them.

Mother Agnes said that the Center has more than 800 names of murder victims, 372 of them murdered in October alone, all of them security forces, pointing out to the “prophetic” observatory called the Syrian Human Rights Observatory that posts daily numbers of deceased people without giving a single name, adding that the Center called the Observatory and requested the names of the deceased, which it failed to deliver to this moment.

She pointed out that some mass media sources are causing people to make horrible mistake, which is unacceptable, noting that the press statutes have become mere ink on paper, with press reporting things that don’t exist in reality and trying to depict Syria as having two components, with the first side being the villains who are the army, security forces and the so-called “shabiha”, and the other side being the protestors who are depicted as being peaceful as lambs and demanding freedom, democracy and human rights.

In turn, journalists from Italian, Belgian, French, Spanish and US news agencies and independent journalists from Lebanon, Algeria and France stressed that objectivity requires acknowledging the fact that there are armed groups attacking the Syrian security forces in order to weaken the regime.

Webster Griffin Tarpley from the Grove Institute in Washington demanded that the BBC, CNN al-Jazeera cease broadcasting lies, saying that he and other journalists visited Homs, Banyas, Tartous and other cities and didn’t see the army killing the people; rather there were armed, hooded groups and sniper killing the army.

For his part, Marc George from the French newspaper Le Libre said that the journalists visited Homs and Banyas and talked to injured soldiers and saw the bodies of the martyrs, affirming that what they witnessed had nothing to do to what was proclaimed by the media, and that the demonstrations were pro-government and not against it.

George stressed that the only martyrs they saw were soldiers, not civilians, and that the al-Jazeera, al-Arabiya and BBC speak as it they’re reciting a lesson that has no relation to the truth.