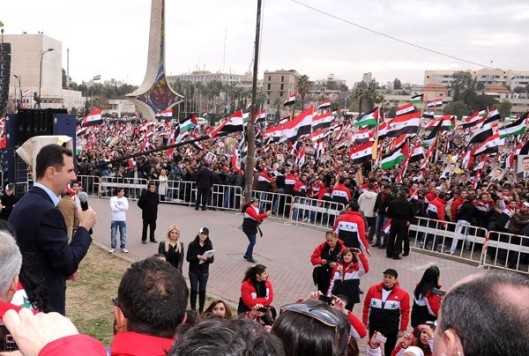 President al-Assad: “We are Victorious against Conspiracy”

In a spontaneous word to the tens of thousands of the Syrians, who gathered since the early hours of the morning at Umayyad Square, President al-Assad underscored that Syria is also to steadily go forward in fighting terrorism.

“We are to be victorious ,with and by you, against the conspiracy,” said President al-Assad to the jubilant Syrians, who hoist the Syrian flag, his posters, and national banners.

“I met you to derive the power in the face of what Syria is being exposed to,” added President al-Assad, highly lauding the Syrians’ awareness, power, and strength as the “compass” leading to the correct path.

“I have strong desire to be here with you at al-Umayyad Square , in the heart of Damascus, the capital of the Umayyads, Resistance, Civilization, the blessed Bilad al-Sham, which they wanted for to be transferred from the land of harmony, amity, and peace to a land which they plant with destruction, killing, and wreckage,” said H.E. President al-Assad to the high applauses, chants and slogans of love, loyalty and allegiance to his leadership.

“I do feel the same love to you as you feel towards me. I wish that God would have granted me a very big heart capable to give the more of amity and love to this great people,” President al-Assad emotionally addressed the Syrians.

President al-Assad voiced pleasure at his meeting and direct talk to the Syrian citizens, appreciating the Syrians’ pride, strength, steadfastness, dignity, which “give high morale to every official”.

“I salute you while you get out from Mosques, churches, schools and universities as to stand against westernization and to support Arabization, and assert the role of your institutions, on top of which the institution of the Army and Armed Forces, whose martyrs are every day martyred so that we are secure and free,” underscored President al-Assad.

“we do trust the future, put trust in you, and through you we are to be victorious against the conspiracy,” added President al-Assad, lashing out at the conspirators who are in the final phase of their conspiracies.

In a splendid show of awareness and national feeling, huge masses on Wednesday flocked to the Syrian squares to express support to the speech of President Bashar al-Assad and to building the renewable Syria.

The participants affirmed the national unity, rejecting all forms of foreign interference and affirming determination to go forwards to reach the aspired-for Syria whose features were outlined by President al-Assad’s speech.

Since the early morning, a huge number of citizens have started to flock to the squares of Umayyad in Damascus, Saadallah al-Jabri in Aleppo, al-Muhafaza in Lattakia, Sabaa Bahrat in Deir Ezzour, Late President Square in Hasaka, Post Crossroads in Daraa, Sutan Basha al-Atrash in Sweida and the main squares in Salqin, Jisr al-Shughour and Abu al-Dohour Town in Idleb.

The participants chanted slogans reflecting the civilized image of the Syrian people whose awareness and solidarity with their leadership enabled them to face all the pressures and misleading campaigns which aim at undermining Syria’s security and stability and dissuading it from its pan-Arab approach through which it works on preserving the rights and interests of the Arab nation.

The participants also held the national flag and banners affirming the Syrians’ support to their leadership and hailing the sacrifices of the army.

They called for discarding the sedition and rejecting the misleading campaigns led by some mass media through falsifying the facts and fabricating lies aiming at spreading chaos and undermining Syria’s security and stability.

In Damascus, the huge masses in Umayyad Square expressed support for the speech of President Bashar al-Assad and the vision outlined in this speech on building the renewable Syria, affirming their rejection of foreign interference in Syria’s internal affairs  and their adherence national unity, chanting a vow of allegiance to President al-Assad.

In statements to SANA, participants in the gathering said that President al-Assad’s speech restored hope and confidence in his strength in the face of the situations in Syria, calling on the observer mission to relay the reality of what is happening with objectivity, credibility and professionalism to the international and Arab communities.

They stressed that the conspiracy targeting Syria has failed despite the pressure and sanctions leveled against it, and that President al-Assad’s speech on Tuesday constitutes a map for the upcoming stage in which reform plays a stratehic role.

The participants said that Syria’s strength lies in its people who managed to confront the conspiracy thanks to its rallying around its leadership and adherence to national unity, noting that the masses that gathered on Wednesday came to express their rejection of the conspiracy and that no-one can speak on behalf of the Syrian people who came to show their support for President al-Assad.

They said that President al-Assad’s presence among them made them more determined to confront the suspect plots and pursue reforms.

They also denounced the crimes committed by armed terrorist groups, saying that those who want to isolate Syria are isolating themselves, and that the sanctions imposed against Syria are part of the conspiracy and target the Syrians’ confidence.

The participants said that the conspiracy is no longer a secret to anyone, affirming that Syria will be victorious thanks to its people’s strength and belief in its leadership, adding that this gathering expresses the Syrians’ commitment to its national choices and rejection of foreign interference and that the Syrians never relinquished their dignity throughout their long history.

In Aleppo, the masses gathering in Saadallah al-Jabri Square expressed adherence to national unity and utter rejection of any foreign interference in Syria’s internal affairs, stressing that Syrians support the reform course of President al-Assad.

The participants said that they gathered to show support for what President al-Assad outlined in his speech, saying that the speech was comprehensive and reassured Syrians and restored hope to them, adding that all Syrians would sacrifice their lives for their country and that there is no place among them for traitors who murder innocents.

In Sweida, the people gathering in Sultan Basha al-Atrash and Tishreen Squares voiced pride in being Syrians, saying that President al-Assad’s speech sent a message telling the whole world that Syria is immune to conspiracies, adding that the speech expressed the heartbeat of the Syrian street and reassured the Syrians.

They expressed rejection of all forms of relinquishing sovereignty and independent national decision, affirming that the Syrians’ determination will not weaken no matter how many lies the biased channels fabricate.

In Idleb, the people of Salqin, Jist al-Shughour and Abu al-Zuhour rallied to show support for the reform process and express rejection of foreign interference and malicious channels who fabricate events.

Participants in the rallies that this is the least they could do to express their love for their country and their leader, calling for holding the biased channels accountable for their distortion of facts and misguiding of public opinion, stressing that these channels broadcast mere lies with the aim of undermining Syria’s security and stability, adding that the Syria media played a vital role in uncovering the conspiracy.

They affirmed that the conspiracy was foiled by the awareness of the Syrian people and their solidarity, stressing that freedom doesn’t come through murder, bloodshed, vandalism and terrorizing innocents, but rather through national dialogue.

The participants also lauded the role of the Syrian army in confronting armed terrorist groups.

In Deir Ezzor, the people gathering in Sabaa Bahrat Square said that they want to send a message to the whole world that Syrians are committed to national unity and the reform program outlined by President al-Assad whose speech on Tuesday strengthened the Syrians’ confidence that Syria is heading towards a new stage in which it will become a model of democracy and progress.

The gathering citizens denounced the terrorist carried out by tools of external forces, noting that Syrians are now aware of the misleading nature of the biased channels.

In Daraa, citizens gathered at the Dawwar al-Barid Square, saying that the people of Daraa are announcing their support for Syria’s unity and stability and that the crisis is receding thanks to the resilience of Syria, the awareness of its people and the rallying of honest people behind Syrians and their leadership.

They stressed that the conspiracy against Syria cannot come to pass due to the massive popular rallying around President al-Assad, saying that the gatherings across Syria on Tuesday is the best proof that the Syrian army is not standing alone in the face of the conspiracy.

In Raqqa, the masses gathering in front of the Governorate Building said that they came to tell all those who conspire against Syria that the people will continue to support reform and that Syria will remain dignified and a bastion of Arab steadfastness.

They pointed out that President al-Assad’s speech on Tuesday offered new concepts such as the definition of Arabism as an affiliation and mutual history, hopes and aspirations, instead of being merely an ethnic concept, and that the speech reassured all faithful Syrians who would rather die before selling themselves to those who seek to control people and achieve colonial plans.

The participants affirmed their utter rejection of all forms of foreign interference and their support of free, independent decision-making, adding that they reject any decision that undermines Syria’s national sovereignty.

In Homs, the people who rallied in al-Ahram Street and marched across the city said that they gathered on this day to affirm their support to reforms and show that the people of Homs are Syria’s faithful soldiers, stressing that President al-Assad’s speech prompted them to take to the streets and show their support for him.

They said that the President’s speech shows the while world that the Syrians are a deep-rooted people and cannot be broken by conspiracies and betrayals, voicing pride in being Syrians and citizens in the country of resistance and civilization.

In Lattakia, masses gathered in al-Muhafaza Square to show their support for President al-Assad’s speech and their rallying around his leadership, with participants stressing that they came to support the decisions of Syria’s political leadership and the independence of national decision.

They said that President al-Assad’s speech focused on the concepts of dignity and national sovereignty which no Syrian can possibly sell, noting that the speech shows President al-Assad’s great confidence in Syria’s future and its ability to overcome the crisis, which reflected positively on the entirety of the Syrian people.

The participants said that the speech also delivered a firm and clear message to all conspirators against Syria which says that the Syrians will always rise to their responsibilities and duties as dictated by their national sense.

They pointed out that their gathering expresses clearly the Syrian people’s faith in their country and leadership who proved to be a man fit for hard times and resilient in the face of pressure, calling for striking down those who try to tamper with the safety of Syria and its citizens.

The participants also swore an oath to continue to preserve national unity, protect Syria’s borders, liberate the Golan, and remain on the course set by President Bashar al-Assad.

Reloaded and published by SyrianFreePress