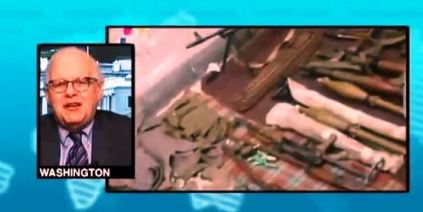 A political analyst says the Friends of Syria conference expected to be held in Tunisia’s capital Tunis aims at creating a scenario in Syria similar to the one, which materialized in Libya.

What follows is a rush transcript of the interview:

Press TV: A number of big players this Friends of Syria meeting. Taking that into account, will it accomplish anything at all?

Tarpley: Well, of course it is very notable that Russia, China, and indeed Lebanon, a country that is immediately involved with Syria, will be boycotting this meeting. This meeting bills itself as the Friends of Syria, and all I can say is that with friends like that, you don’t need enemies. The purpose of the conference is to bring the wonderful benefits of NATO bombing and a civil war on the Libyan model to Syria.

My calculation is that if NATO does to Syria what it did to Libya last summer, that would mean between half a million and one million dead Syrians, civil war, chaos, warlords, and so forth. The solution to Syria is very simple: Tell NATO to call of their death squads, tell NATO to stop smuggling foreign fighters and weapons and explosives into the country.

Now the conference itself in Tunisia will be held not far from the Ruins of Carthage, which should serve as a momento mori to some of these imperialists.

What’s notable about the conference is that Syria will not be represented. Imagine a conference about Syria, where Syria isn’t even invited. Even equally absurd, the Syrian opposition so-called, is also not invited. The NATO people have not been able to come up with a group of serious-looking presentable puppets so the Syrian National Council, the Free Syria Army, all of these people, they are not invited. They’re being kept in the closet.

The reason they’re officially given is that they’re fragmented, they squabble and can’t agree. They notice this actually a regime-change conference, but there’s no alternative. So they’re saying, let’s have regime change, with no alternative government and they even admit that. I think the deeper level of course is the Syrian opposition is shot through with Al Qaeda operatives, if they had a delegation, who knows who the head of the delegation might be. It might be Abdul Hakim Belhaj, the fighter from Libya who has been reported to be leading some of these death squads in the northern part of Syria.

The Tunisians in setting this up have reverted unfortunately to their role as the obedient puppet of the West. The Tunisian foreign minister is with I think amazing arrogance has said that the Syrians can choose between Libya and Yemen. In other words, you can be bombed and destroyed as a country, or you can have this fake transition of power where you then end up with an election with only one person.

On the whole, it looks like [US Secretary of State] Hillary Clinton who is the main architect of this exercise; I think there’s a good chance she’ll end up with a lot of egg on her face, because this looks to me like it might be headed to be a fiesco. There supposedly people from 70 countries [expected to be at the conference].

Press TV: As you mentioned, those out to topple Assad have tried various ways to get the international community behind their plot, but have only gotten a non-binding UN resolution so far. Does that in a sense indicate failure on their part and will that remain the status quo?

Tarpley: I think it does indicate failure. We may coin a phrase, be in the last throes of imperialism. What is being attempted here is an ultimatum. The plans that are circulating on the eve of this Tunisian exercise are that the countries, this ad hoc group, coalition of the willing, I guess we can call it, of rump states or rump coalition, at least. They come together and they say OK Assad, you have 72 hours to do what we want. We have humanitarian corridors; we want the Syrian army out of the cities so that our dead squads can take over with al-Qaeda leading the pack and if you do not cave in within 72 hours, then we will impose more sanctions.

I do not know who is going to follow those sanctions. I think they have already reached the limit with that because these of course would be unilateral sanctions; they would not even be UN sanctions.

So it seems to me that the international climate is changing and one other thing on a belated topic that I would point to is the Brazilian Foreign Minister, [Antonio] Patriota has called on Ban ki-Moon to say, look Ban ki-Moon, you have a responsibility to say that all of these options that we hear on the table, as for example in regard to Iran, some of those violate the charter and you Ban ki-Moon have got to say these are illegal. So in effect, stop playing the role of a good NATO puppet and start acting like the Secretary General of the United Nations. I think that is another straw in the wind for a change of the international climate.

Reloaded by Philip Iron at Youtube-SyriaFreePress