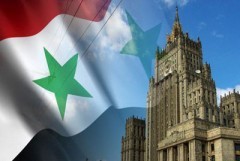 BEIJING, (SANA) – China hoped on Monday that the referendum on the new constitution would push the ongoing reform process in Syria forward and start political dialogue in response to the Syrian people’s aspirations for change and legitimate demands.

“We hope that all sides in Syria work together and exert coordinated efforts to ease the tension as soon as possible,” Chinese Foreign Ministry’s Spokesperson, Hong Lei, told a news conference.

Lei pointed out that his country calls on the international community to fully respect Syria’s sovereignty, independence and territorial integrity and to respect the choice of the Syrian people.

He reiterated China’s stance which rejects any foreign interference or solutions, adding that China adheres to an objective and responsible stance based on protecting the interests of Syria and the Arab peoples.

Concerning the so-called “Friends of Syria Conference” held in Tunis recently, Lei pointed out that China decided not to attend this conference because the purpose of the conference and its mechanisms and role need more study and understanding.

TEHRAN, (SANA) – Iranian deputy Foreign Minister for Arab and African Affairs, Hussein Amir Abdullahyan, stressed on Monday that the wide participation in the referendum on the new constitution in Syria stems from the will of the Syrian people and Government to achieve reforms and adhere to the national unity and restore stability and security.

In a statement,  Abdullahyan said that the participation in the referendum sent a clear message to the conspirators who are seeking to avoid any political and peaceful solution to the crisis in Syria.

MOSCOW, (SANA) – Russian Foreign Ministry announced on Monday that the results of the referendum on the new constitution in Syria indicate that the Syrian people support their leadership.

In a statement, the Ministry said that Moscow considers the referendum as an important step on the way to making Syria a modern democratic state.

The Russian Ministry added that Russia views the results of the constitution as evident of the support the Syrian Government enjoys by its people, pointing out that the opposition groups which called for boycotting the referendum proved to be lacking popularity and they do not have the right to speak on behalf of the Syrian people.

The statement added that Russia calls on all sides to refrain from violence and get involved in dialogue with no preconditions.

Pushkov was quoted as saying that according to his information, the Western countries are not trying to evacuate the injured, indicating that the gunmen haven’t consented to evacuating them, only allowing journalists to videotape them.

Earlier, the Foreign Ministry had underlined the importance that foreign journalists respect the laws regulating journalistic work and not enter the Syrian territories to get to restive areas. F.Allafi/al-Ibrahim/M. Ismael