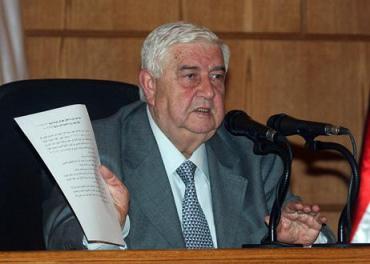 DAMASCUS, (SANA) – The Syrian Foreign Ministry said that armed terrorist groups have been present in Syria ever since the onset of events, killing innocent civilians to inflame sentiments and make cheap gains on the regional and international levels.

In two identical letters sent to Chairman of the UN Security Council and the UN Secretary-general, the Foreign Ministry said ”Those who have been arming these groups have denied this over the past months…The use of arms by these groups has resulted in deaths and injuries among the law-enforcement members and the army, as well as destroying scores of public and private facilities, not to mention vandalizing oil and gas pipelines and railways.”

The Foreign Ministry went on to say ”The Syrian authorities were obliged to take the necessary measures to protect innocent civilians and preserve the stature of the state. Upon doing just that, unjustifiable campaigns were launched by Western and Arab powers linked to these groups in a way that exposed their financial and political support to their terrorist acts, and strived to tarnish the image of Syria and mobilize the world public opinion against it through convening endless meetings at the Arab League, the Human Rights Council, the UN General Assembly and Security Council.”

The Foreign Ministry clarified that when the AL monitoring mission validated the existence of these armed groups and their non-abidance by the Arab work plan, the Arab League withdrew the monitors with the aim to hide the truth and evade the AL decisions.

”The fact that no formal copy of this report was submitted to the UN Security Council until now proves the AL disavowal of its decisions and credibility,” said the Syrian Foreign Ministry, adding that Syria was not surprised at the statements of the foreign ministers of Saudi Arabia and Qatar during and following what the Syrian people dubbed ”Enemies of Syria” meeting.

The Foreign Ministry added that arming the opposition by these countries started long time ago, and the decisions taken by these sides are a cover-up meant to express illegitimate support that contradicts the UN Charter and runs counter to the relations among the Arab countries.

”Since when are terrorism and holding arms part and parcel of the opposition?” asked the ministry, adding that those who want freedom and democracy for the Syrian people have to be free and democratic in his own countries.

The Foreign Ministry said that terrorism cannot be justified as self-defense, indicating to the opportunism of some international powers which claim to be combating terrorism worldwide while supplying it with arms in Syria and elsewhere, holding the countries which support the armed groups fully responsible for the bloodshed in Syria.

The Foreign Ministry added that by facilitating the acquisition of weapons by the armed groups and training terrorists on their own soil, some neighboring countries go against good-neighborliness which will later lead to catastrophic outcomes.

The Syrian Foreign Ministry said that Istanbul Council establishing a military bureau to conduct military operations against Syria from a neighboring country is another proof of the terrorist nature of the opposition.

The Foreign Ministry said that Syria is keen on pushing ahead with achieving national dialogue as the sole way for addressing standing problems, and with the reform process that was culminated lately in the majority of Syrians approving the new constitution which emphasizes political pluralism and free elections.