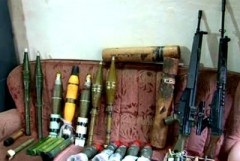 Terrorists killed, Others Arrested in Homs and Idleb Countryside

Homs / Idleb – The competent authorities on Thursday seized a car loaded with a big quantity of different weapons, some of them of an Israeli-made, on Homs international highway.

The authorities clashed with an armed terrorist group between the villages of Kfar Nobl and Hazazin in Jabal al-Zaweih, Idleb, killing a number of terrorists and arresting several others.

At Maarat al-Numan, the authorities clashed with another terrorist group that was attacking civilians, killing 3 of the armed men and wounding others.

Security members also restored 14 private and public cars that were stolen by the armed groups.

2 thoughts on “Israeli-made weapons seized in Hom – Terrorists neutralized, others arrested in Homs and Idleb countryside”