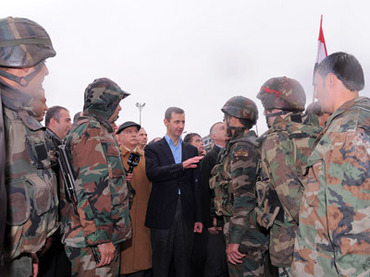 The Syrian government has said that it will not withdraw its troops from towns and cities across the conflict-torn country until “peace and security prevail.” Officials maintain that security forces are there to uphold security and protect civilians.

­Foreign ministry spokesperson Jihad Makdessi told Syrian State television on Friday that the troops were stationed in a capacity of “self-defense and protecting civilians.” He emphasized that security was a Syrian matter and that the UN must recognize the sovereignty of the Syrian government.

Furthermore, Makdessi said that the Syrian government was willing to cooperate with Koffi Annan’s peace plan to “remove all excuses” for possible international intervention.

“The battle to topple the state is over. Our goal now is to ensure stability and create a perspective for reform and development in Syria while preventing others from sabotaging the path of reform,” he stressed.

The announcement came just hours after Annan’s spokesperson Ahmad Fawzi called for the government to be the first to cease the fighting as “a gesture of good faith.”

“The deadline is now,” Fawzi said.

Assad had said earlier that he would not call for a ceasefire until opposition rebel groups have laid down their arms. For their part, the Syrian opposition refuse to accept any resolution that does not stipulate Assad’s removal, claiming that his acceptance of Annan’s 6-point proposal is merely an attempt to draw out the conflict.

Opposition activists in the country reported an escalation in violence in Syria on Friday, with violent clashes erupting in Damascus and the northern city of Idlib.

Meanwhile, the international community is still searching for a solution that will bring the conflict to an end. The second summit of the so-called ‘Friends of Syria’ is scheduled for this Sunday and is aimed at encouraging the unification of disparate Syrian rebel groups so they can offer a viable alternative to the Assad regime. Ways to get humanitarian aid to the most violence-torn areas of the country will also be high on the agenda.

The group was created with a view to bypassing the Russian and Chinese veto of previous Security Council resolutions that called for the removal of Assad.

The uprisings against Syrian President Bashar al-Assad have been raging for well over a year, with UN estimates putting the death toll at over 9,000 people.