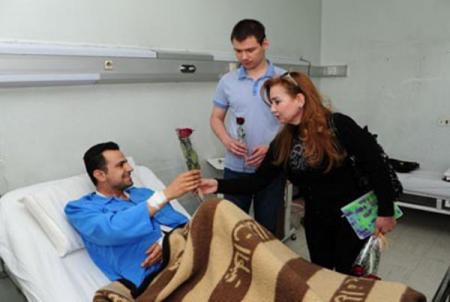 A delegation of the World Federation of Democratic Youth (WFDY) and the World Peace Council (WPC) and  visited the injured army members at Tishreen Military Hospital in Damascus.

The delegation members expressed solidarity with Syria, stressing rejection of all forms of foreign interference in its internal affairs.

The doctors and injured members briefed the delegation on their health situation and how they were targeted by the armed terrorist group while performing their national duty in protecting citizens and private and public properties.

WPC President, Maria Socorro Gomes, stressed the WPC solidarity with Syria and its people against the conspiracy and the media war launched by the imperialist powers, especially the US, against them.

Gomes added that the WPC members will convey the real image of the reality of events in Syria, hoping that Syria will come out of this stage stronger.

For his part, Secretary of the Palestinian Committee for Peace and Solidarity and the Regional Coordinator of the Middle East at the WPC, Akel Taqz, reiterated rejection of foreign interference in Syria, adding that calls for arming the opposition are negative and will not help Syria, calling that all efforts should be in the interest of launching a comprehensive national dialogue and meeting the demands of the Syrian people. He said that the delegation comprises of the WFDY, the WPC, 29 organizations and 23 countries.

In turn, another delegation member from Britain said that we came to Syria to inspect the reality on the ground as we know that the British media cannot be counted on to convey correct facts, adding that only the Syrians can solve the problem in Syria, not through foreign interference.

The delegation members also attended funeral processions for martyrs and offered condolences to their families.