Recently, Russian Times published the interview of Rupert Colville, UN spokesman for the Human Rights Commission with Marinella Corregia of No War Network.

Syrian opposition blamed the slaughter in Houla on the Syrian government, as Obama dismissed suggestion that the US becomes involved militarily.

Mr. Obama will be meeting with Russia’s Mr. Putin next month at a summit and will attempt to convice Russia to change its position of supporting the Syrian government.

Mr. Putin is not going to change Russia’s position of supporting the Syrian government, no more than the US position is to support the Zionist state of Israel. 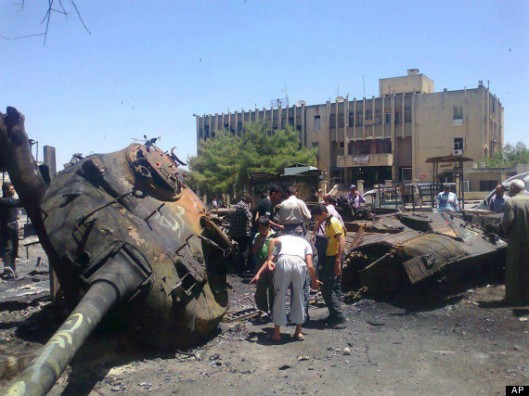 BEIRUT, June 4 (Reuters) – Syrian rebels killed at least 80 army soldiers in a surge of attacks at the weekend, an opposition watchdog said on Monday, carrying out their threat to resume fighting if President Bashar al-Assad failed to observe a U.N.-backed ceasefire.

The May 25 massacre of at least 108 people, nearly half of them children, in the Houla area of Homs province dealt a possibly fatal blow to envoy Kofi Annan’s proposed ceasefire, which was supposed to take effect on April 12 but never did.

A Free Syrian Army spokesman said the rebels were no longer bound by the truce after their Friday deadline passed.

“We have decided to end our commitment to this (ceasefire),” Major Sami al-Kurdi, told Reuters from Syria, adding that rebels had begun attacking government forces to “defend our people”.

He said a U.N. observer mission should be turned into a “peace-enforcing mission”, or that the world should impose a no-fly zone and a buffer zone to help bring Assad down.

The latest violence and a defiant speech by Assad on Sunday raised questions about how long Annan can pursue his threadbare peace plan on behalf of the United Nations and the Arab League.

Insurgents told the British-based group they had killed more than 100 soldiers and destroyed some tanks in clashes across Syria, including Damascus and Idlib province in the northwest.

Syria’s state news agency reported the burial on Monday of 30 members of the security forces killed by rebels.

A Syrian troop pullback was at the top of Annan’s six-point plan to halt hostilities, allow peaceful protests, supply humanitarian aid and start a political transition in a country controlled by the Assad family with an iron fist for 42 years.

“The Annan mission is essentially dead, and of course most Western powers admit that,” said Michael Stephens, researcher at the Royal United Services Institute’s branch in Qatar.

“Houla changed the game completely in terms of what people were willing to accept and what they were not.”

However, Russia and China, wary of any Western-led military intervention in Syria, say Annan’s plan is the only way forward. They have twice blocked U.N. Security Council resolutions which would have condemned Damascus and perhaps led to sanctions.

Western powers have no appetite for Libya-style military action, but have provided no alternative to Annan’s efforts.

Assad has rebuffed criticism of the carnage in his country. “When a surgeon performs an operation to treat a wound, do we say to him: ‘Your hands are covered in blood’?” he asked in his speech on Sunday. “Or do we thank him for saving the patient?”

Annan, who has inserted 300 U.N. observers into Syria to verify the non-existent truce, will brief the Security Council on Thursday. A U.S. official said the envoy would see Secretary of State Hillary Clinton in Washington the next day.

Ban, speaking on the sidelines of an Islamic Development Bank meeting in Jeddah, urged Assad’s government to stop the violence immediately “in the name of humanity” and to start a political dialogue with his foes.

“We are deeply troubled by what has been going on,” the U.N. chief told Reuters. “Annan’s plan remains central to the resolution of the Syrian crisis.”

U.N. diplomats in New York say it is not clear whether the Security Council will renew the increasingly risky U.N. observer mission to Syria when its 90-day mandate expires around July 20.

Arab League chief Nabil Elaraby has asked the Security Council to expand the size and beef up the force’s mandate, but one diplomat said council members saw many risks involved in that idea, which the Syrians were anyway unlikely to accept.

U.S. officials do not appear ready to give up on Annan’s Syria mission, instead hoping that Russia, Assad’s staunchest backer among major powers, can be coaxed into discussing a diplomatic solution that might lead to his departure.

U.S. Secretary of State Hillary Clinton spoke by telephone to Annan while in Stockholm on Monday, briefing him on her efforts to engage Russia on a “political transition” to remove Assad from power, a senior State Department official said.

The official, who spoke on condition of anonymity, said Clinton had invited Annan to Washington for talks on Friday and that Clinton expected to meet senior officials from Europe and the Middle East to discuss Syria on Wednesday in Istanbul.

The latest flare-up can only intensify alarm that Syria is sliding deeper into a civil war envenomed by sectarian rancour between Assad’s minority Alawites and the Sunni Muslim majority.

France’s foreign minister said Syria’s troubles must not be allowed to spread to its neighbours, such as Lebanon where 13 people were killed last week in Sunni-Alawite clashes.

“France has an attachment to Lebanon and we very strongly wish to avoid a situation where the people of Lebanon suffer anew from what is happening Syria,” Laurent Fabius said after meeting his German counterpart Guido Westerwelle in Berlin.

Both said their governments were urging Russia to step up pressure on Syria to comply with Annan’s plan.

“A minimum of 4 to 6 checkpoints in the village of Ariha were attacked and destroyed in the last 24 hours,” he said.

Clashes also broke out in the city of Deraa, one of the focal points of the revolt, he said.

Damascus accuses armed “terrorists” of killing more than 2,600 soldiers and other members of the security forces.