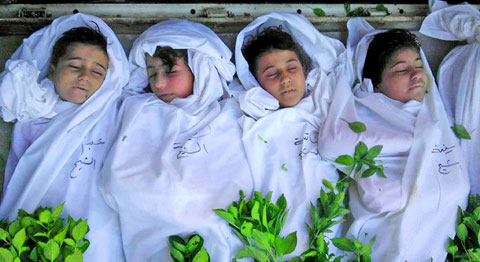 Bloodshed the work of armed militants before Syrian troops arrived.

In an extraordinary account of the Daraya massacre by veteran journalist Robert Fisk, eyewitnesses reveal that it was U.S.-backed FSA rebels and not the Syrian Army who were responsible for the slaughter of 245 men, women and children.

The massacre, which took place last weekend, was instantly blamed on President Bashar Al-Assad’s forces by the global media despite video footage from the scene showing victims welcoming the presence of Syrian Army troops and blaming the violence on armed rebels.

Those eyewitness accounts have now been verified thanks to the courageous journalism of veteran reporter Robert Fisk, who is risking his life in his role as one of the few impartial media observers inside Syria.

In an article for the London Independent entitled Inside Daraya – how a failed prisoner swap turned into a massacre, Fisk reveals how he was able to talk to eyewitnesses independently of Syrian officials, all of whom said the violence was carried out by armed rebels before the Syrian Army even arrived in the town, which is five miles outside Damascus.

Explaining how negotiations for a planned prisoner swap between Syrian forces and FSA rebels broke down, Fisk quotes an eyewitness called Leena who said she saw ten dead bodies lying on the road near her home beforeSyrian troops had entered the town.

Another eyewitness reveals that most of the dead were off-duty army conscripts as well as a postman. “They included him because he was a government worker,” the man said.

“If these stories are true, then the armed men – wearing hoods, according to another woman, who described how they broke into her home and how she kissed them in a fearful attempt to prevent them shooting her own family – were armed insurgents rather than Syrian troops,” writes Fisk.

Lorry driver Khaled Yahya Zukari also related how the armed rebels killed his wife and baby daughter simply for driving down the road.

“We were on our way to [the neighbouring suburb of] Senaya when suddenly there was a lot of shooting at us,” he said. “I told my wife to lie on the floor but a bullet came into the bus and passed right through our baby and hit my wife. It was the same bullet. They were both dead. The shooting came from trees, from a green area. Maybe it was the militants hiding behind the soil and trees who thought we were a military bus bringing soldiers.”

The Daraya massacre by no means represents the first time the international media has blamed a mass killing on Assad’s forces in order to grease the skids for a NATO military intervention when in fact the bloodshed was the work of Syrian rebels.

As the respected German daily Frankfurter Allgemeine Zeitung (FAZ) reported, the Houla massacre, which was immediately blamed on Assad’s forces by the establishment media, was in fact carried out by anti-Assad Sunni militants.

President Barack Obama recently signed a secret order confirming that he would use taxpayer money to support Syrian rebels with “non-lethal aid”. However, the New York Times admits that the CIA is helping steer heavy weaponry to the rebels on the Turkish border paid for by Saudi Arabia and Qatar.

Al-Qaeda terrorists are also flooding in from numerous countries, most recently Yemen, in order to train and command the U.S.-backed rebel army. In a July 30 report, the London Guardian admitted that Al-Qaeda fighters met regularly with Syrian rebels and taught them how to build bombs.

Watch a video clip below in which further evidence of the FSA rebels being responsible for the massacre is presented.

Paul Joseph Watson is the editor and writer for Prison Planet.com. He is the author of Order Out Of Chaos. Watson is also a regular fill-in host for The Alex Jones Show and Infowars Nightly News.

The mass media are toeing the official warmonger line on Daraya, citing “as yet unconfirmed activist reports” (fake tweets?) blaming “Assad’s forces.” Yet Syrian TV has broadcast eyewitness reports of the massacre perpetrated by the FSA before the Army arrived. Armed gangs roamed the streets, sniping and trying to get into homes. Multiple witnesses testified they did not dare to leave their homes until the Army arrived. One witness tells how civilians were rounded up and shot.
When the Army arrives, the terrorists are driven off, but not before taking a video of their own dead and calling it a ‘civilian massacre.’

The whole operation was evidently coordinated and tailor-made for the MEDIA — the warmongerers of yellow journalism. The time has come to rename the MSM, or Mainstream Media, as the MMM — the Mass Murdering Media. Its purpose, to get NATO members to agree on a strike against Syria.

The USA has official training manuals for creating an insurgency, but they know that the Syrian government is way too popular and most of the Syrian people are way too smart for that. So they shipped foreign jihadists, dupes and mercenaries into Syria to destabilize the country, while the Mass Media continually create the ILLUSION of an uprising, harping on “opposition,” “protesters,” “civil war” and “democracy.” They never mention that on one day last summer, 14 million Syrians out of a population of 22 million demonstrated in SUPPORT of their state against the Evil Empire. But that picture never makes it to the screens of the Orwellian Gulag of War is Peace, Bombing is Humanitarian.