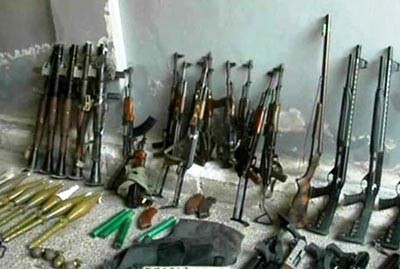 The armed forces continued its operations in Aleppo city on Wednesday, clearing al-Midan police department area from terrorists and killing tens of them.

Locals in al-Midan area marched to salute the Syrian Arab Army and thank it for clearing the area of terrorists.

Units of the Army carried out a number of operations against headquarters of armed terrorist groups at al-Midan, Hreitani and Bustan al-Basha neighborhoods in Aleppo, causing heavy losses and injures among the terrorists.

In Sleiman al-Halabi area in the city, an armed forces unit targeted terrorist bases and inflicted heavy upon their tanks.

The armed forces carried out several operations that targeted terrorists in the areas of Ba’edeen Square and Sheikh Fares, inflicting heavy losses upon them.

The armed forces also eliminated scores of terrorists who were trying to enter Aleppo through Andan, Hraitan and Qabtan al-Jabal districts.

SANA’s reporter added that 4 terrorists were killed while trying to enter the neighborhoods of Salaheddin and Saif al-Dawla in the city.

Meanwhile, five terrorists were arrested as they were trying to enter Aleppo city near al-Barqoum Bridge.

The armed forces destroyed 10 cars equipped with DShK machineguns and killed the terrorists inside them in Mayir area in Aleppo countryside.

Two pick up cars equipped with DShK machineguns were also destroyed in Nubul area in the countryside of Aleppo with all the terrorists inside were killed, SANA reporter said.

The reporter quoted a source in the province as saying that an army unit also destroyed 14 DShK-equipped vehicles and killed all terrorists who were in the cars near Babis crossroads in Hoor town in Aleppo Countryside.

A unit of the armed forces carried out an operation against a terrorist group in al-Atareb area in the countryside of Aleppo, killing two of the most dangerous wanted men.

Another armed forces unit carried out operations in the village of Ikhtiarin, Tal Jabin and near the municipality in Manbjen and Mare’a in Aleppo countryside, targeting cars manned by terrorists and equipped with DShK machineguns along with gatherings of terrorists, killing a large number of the terrorists and destroying their cars along with their passengers.

A suicide terrorist exploded himself in a booby-trapped car near a checkpoint for law-enforcement forces on Ariha-Saraqeb road in the countryside of Idleb, martyring a civilian, two law-enforcement members and injuring others.

SANA reporter quoted a source in the province as saying that the car bomb explosion caused material damage to the nearby al-Wis Factory.

In Idleb countryside, an armed forces unit confronted a terrorist group that attempted to attack the radio station in Saraqeb area, inflicting heavy losses upon the terrorists.

A unit of the army today targeted the positions of the terrorists in al-Rastan, Talbeisa in Homs, inflicting heavy losses among them.

SANA reporter quoted a source as saying that a unit of the army clashed with an armed terrorist group near al-Dabaa village in al-Qseir countryside, killing a number of mercenaries and destroying their cars equipped with Dushka machineguns.

In Damascus Countryside, units of the armed forces dismantled scores of explosive devices and mortar rounds planted by terrorists around al-Shafi’e Mosque and Martyr Ismael Akkari School and the surrounding residential building in the area of Yelda.

An official source told SANA reporter that the weight of the explosive devices, which were made up of cylinders, varied between 25 and 50 kg.

The source said the a number of gunmen were arrested in Yelda area in the frame work of clearing it of the terrorist groups, adding that the army forces continued pursuing terrorists in al-Hjeira town.

In Homs, authorities targeted an armed terrorist group that was setting up a mortar launcher between the big and small roundabouts in Tal Daw in the province to attack citizens.

The authorities killed and injured many  terrorists and destroyed the launcher.