President Bashar al-Assad affirmed Syria’s full commitment to cooperate with any sincere efforts to resolve the crisis in Syria as long as they were neutral and independent.

President al-Assad’s stress came during his meeting on Saturday with the UN Envoy to Syria, Lakhdar Brahimi, and the accompanying delegation.

The President said the real problem in Syria is the confusion of the political axis with what is happening on the ground, considering that work on the political axis is continuing, particularly regarding the serious call for a Syrian dialogue that is based on the wishes of all Syrians.

“The success of the political work is linked with exerting pressure on the countries which are funding and training the terrorists and allowing smuggling of weapons into Syria to stop such acts,” President al-Assad added.

For his part, Brahimi stressed that the basis of his work is the interest and aspirations of the Syrian people, saying he will work with complete independence and based on his main reference of Kofi Annan’s plan and Geneva statement.

He noted that any other points to be added or amended will be through agreement with all sides.

The UN envoy underlined the need for concerted efforts by all sides to find a solution to the crisis in light of Syria’s importance and its strategic position, demographic diversity and the influence of the Syrian crisis on the whole region, saying “Eventually, there can’t be a solution except through the Syrian people themselves.” 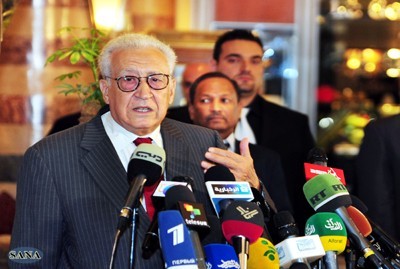 Brahimi: The Ground Exists for Solving Crisis in Syria

“We will try to do our best to provide ideas and employ what the situation needs of potentials to help the Syrian people get out of this ordeal”, Brahimi added.

The UN Envoy pointed out that he is fully familiar with what the former UN envoy to Syria, Kofi Annan, carried out, adding that he will continue what Annan started in spite of difference which arises daily in the Syrian situation.

Brahimi reiterated his description of his mission as difficult, considering the crisis in Syria as very dangerous and it is aggravating and jeopardizing the Syrian people, the region and the world at large.

Answering a question on the possibility of getting the violence in Syria to halt, Brahimi said “We have to bridge this gap through finding a common ground. This ground exists and is represented in the fact that all sides love their homeland, and we must help them.”

The international envoy said his team will have an office based in Damascus headed by Mukhtar Lamani, noting that he will be soon coming back to Damascus to continue talks and work on halting the violence and ending the crisis.

Brahimi added that he will also pay visits to all the countries with influence on and interest in the Syrian affair inside and outside the region, in addition to his visits to New York to hold meetings at the Security Council and with the UN Secretary General.

1 thought on “President al-Assad to Brahimi: “Syria Committed to any Sincere, Neutral and Independent Efforts to Resolve Crisis in Syria””