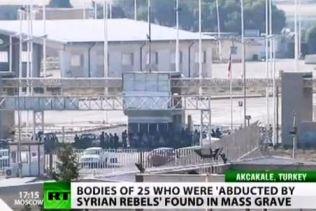 DAMASCUS: BODIES OF 25 CIVILIANS, WHO WERE ABDUCTED BY ‘REBEL’ TERRORISTS, HAVE BEEN FOUND IN MASS GRAVE

A unit of the armed forces on Friday uncovered a mass grave including the bodies of 25 citizens who had been kidnapped earlier and killed by the armed terrorist groups in al-Qadam area in Damascus.

The bodies were found bound and blindfolded.

A unit of the armed forces discovered explosive devices planted by terrorists in al-Tadamun and al-Hajar al-Aswad neighborhoods in Damascus countryside.

An official source told SANA that the armed forces discovered 6 explosive devices, including four in al-Tadamun and two others in al-Hajar al-Aswad, weighing between 30-40 kg. 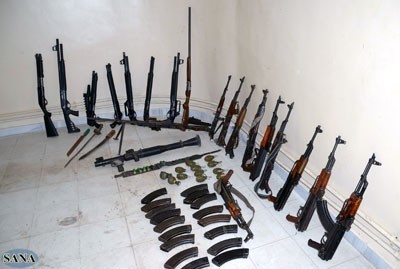 A unit of the armed forces killed a number of terrorists in Beit Jen in Damascus Countryside, arrested others and confiscated their weapons.

The authorities on Friday uncovered a tunnel connecting the neighborhoods of al-Khalidiyeh, al-Qusour and al-Hasuiyeh in the city of Homs which is being used by the armed terrorist groups for transporting weapons and moving.

SANA reporter said the tunnel is 1 km long, in which six terrorists were arrested by the authorities.

Many Terrorists Killed and Injured in the Countryside of Homs

Authorities confronted armed terrorist groups which attacked citizens and law-enforcement forces in Deir Ba’albeh in the countryside of Homs.

A source in the province told SANA reporter that the authorities killed and injured many terrorists.

The authorities also clashed with an armed terrorist group in al-Khandaq Street in Bab Hood neighborhood.

A source in the province told SANA reporter that the authorities inflicted heavy losses upon terrorists, killing a number of them, including a sniper.

In Lattakia, the authorities seized 30 kg of C4 explosives in a residential apartment in al-Mashroe al-Sabei in the city of Lattakia.

SANA reporter quoted a source in the province as saying that the authorities stormed on Thursday night a hideout for terrorists in al-Tabyat neighborhood in the city of Lattakia.

The source added that large amount of weapons including machineguns, sniper rifles, pump action rifles, communication devices, masks and ammunition were seized inside the hideout.

The competent authorities seized on Friday a big quantity of stolen medicine that was stored in a warehouse in al-Makateb Street in Shreitah area in Lattakia city.

A source in the governorate told SANA that the competent authorities seized 1, 200 cartons of various types of medicine, indicating that a person involved in stealing the medicine was arrested.

A Number of Terrorists Killed in Countryside of Aleppo

A unit of the armed forces targeted a gathering for terrorists in Qubtan al-Jabal in the countryside of Aleppo, killing scores of them.

The Armed Forces destroyed two DShK-equipped cars and a Mortar cannon, killing terrorists inside the vehicles and a nearby sniper in al-Arqoub area in Aleppo.

Leader of an armed terrorist group, nicknamed Hajj Ibrahim, and the gunmen of his group were killed in Bustan al-Basha in Aleppo.

The army also killed dozens of terrorists who were stationing in al-Sakhour Roundabout in Aleppo.

Terrorist Abdullah Majdami, one of the most dangerous terrorist groups’ leaders, was killed in al-Arkoub Roundabout in Aleppo.

A source in the governorate told SANA that the device was put in a plastic container and rigged for remote detonation, indicating that the device contained explosives and sharp tools to cause as much damage as possible.

The authorities seized large amounts of ammunition and stolen medicine in Nahta area in Daraa countryside.

A source in the province told SANA reporter that the authorities also arrested several dangerous terrorists in Daraa and its countryside on Friday.

The army destroyed two trucks loaded with weapons and ammunition in addition to a number of cars and motorcycles and killed the terrorists riding in them in Shalakh town in Idleb province.

The authorities also eliminated an armed terrorist group in Ihsem in al-Zawiya mountain in Idleb.