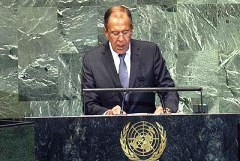 30/09/2012 – Russian Foreign Minister Sergei Lavrov held the countries, that reject the implementation of Geneva agreement on Syria, responsible for pushing Syria even deeper into internecine strife and continue militarizing the crisis as they only call the Syrian government to stop violence and encourage the opposition to continue the acts of violence.

Speaking at the 67th session of the UN General Assembly on Friday, Lavrov said “The international community should unify efforts to coerce all sides of the Syrian crisis to end violence immediately, launch dialogue and reach a middle-ground solution on the reforms that satisfy all spectrums of the Syrian people.”

“Russia resolutely condemns all kinds of violence, from wherever source it comes from, and is convinced that there is still an opportunity to undertake collective actions,” Lavrov added, asserting that extremist organizations including al-Qaeda have become more active in Syria and carried out terrorist acts against the inhabitants and the public infrastructure.

He underscored that practical steps to overcome the crisis need to begin through halting violence, releasing of prisoners and hostages and supplying of additional humanitarian aid, as this will create conditions to start an inter-Syrian dialogue.

He expressed Russia’s support to the efforts of the UN envoy to Syria Lakhdar Brahimi, asserting that his country will exert all efforts to make his mission a success.

Lavrov said that Russia supports the peoples’ right to determine their own future and move to the most effective ways of state governance, stressing the importance that these changes take place away from violence and foreign interference.

Lavrov stressed the importance that the unfolding situation in the Middle East won’t push the Palestinian cause to the peripheries, calling for a just and comprehensive settlement that leads to establishing a viable Palestinian state.

”States have to protect themselves from provocations and abusing religious feelings, but terrorist acts are unjustifiable, and so are attacks on diplomats and the UN staff,” Lavrov added.

He added that slapping sanctions is, according to the UN Charter, the prerogative of the UN an such decisions are taken unanimously.