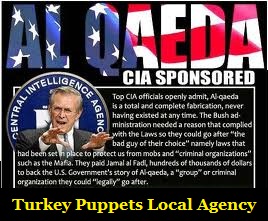 Al Qaeda, as the U.S., incites terrorism in Syria

Al-Qaeda leader Ayman al-Zawahiri’s recent call on Muslims to support the insurgency in Syria will become a “hotbed of terrorist activity” not only in Syria but also in the entire region, a political analyst tells Press TV.

The al-Qaeda leader recently called for support for foreign-backed insurgents in Syria to topple the government of Syrian President Bashar al-Assad.

“I incite Muslims everywhere, especially in the countries that are contiguous to Syria, to rise up to support their brothers in Syria with all what they can and not to spare anything that they can offer,” Zawahiri stated in a two-hour video posted Wednesday on Jihadists websites.

Syria has been experiencing unrest since March 2011. Many people, including large numbers of security forces, have been killed in the turmoil.

Damascus blames the West and some of its allies, including Saudi Arabia, Qatar and Turkey, for arming and funding the insurgents.

Despite a temporary truce that took effect in Syria on Friday, the insurgents launched attacks in several areas, killing dozens of people and injuring tens of others.

The Syrian army has said that it is fully committed to the truce, but it is responding to insurgent attacks that violate the ceasefire.

Press TV has conducted an interview with William Jones, political commentator with the Executive Intelligence Review weekly magazine, to further discuss the issue.

Published on Oct 28, 2012 by PressTVGlobalNews