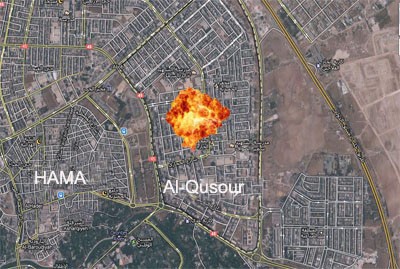 Terrorists on Friday detonated an explosive device they had planted in al-Qusour neighborhood in the city of Hama, injuring a number of citizens and causing material damage in the site of the blast.

In the same context, authorities thwarted an attempt to blow up another explosive device planted by terrorists on the roof of an abandoned house in Tariq Halap neighborhood in the city.

Meanwhile, authorities foiled a car bomb detonation attempt near a checkpoint in Debsi Afnan area in the countryside of Raqqa province and killed terrorists Mousa al-Hasan and Mansour al-Breij.