A unit of our armed forces on Sunday directed painful blows to a gathering for terrorists in al-Bukamal, Deir Ezzor countryside, killing and wounding dozens of them.

Another armed forces unit clashed with a terrorist group in al-Jbeileh district in Deir Ezzor city, killing and wounding its members.

The source said terrorist, Abdul Rahman Saleh al-Khlaif al-Habboush, a prominent member in the so-called “al-Muhajirin (the migrants) battalion” affiliated to Jabhat al-Nusra was identified among the dead.

Meanwhile, an army unit clashed with terrorists, most of whom are from Jabhat al-Nusra, near al-Ba’ajin School in the same area, killing and injuring many of them.

Another army unit killed a number of terrorists in al-Ommal neighborhood in the city and arrested terrorist Safwan Karjousli from the so-called ‘Ansar al-Sunneh’ battalion.

Scores of terrorists were killed while trying to steal gas from a pipeline in al-Tabiyeh area. An explosion occurred as the terrorists were filling gas bottles from the pipeline which caused their death. 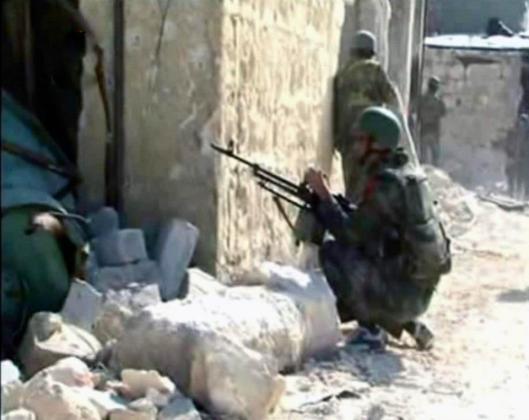 Five cars for terrorists, three of which are equipped with machineguns and the other two loaded with weapons, ammunition and terrorists, were destroyed near Saadallah al-Jaberi school in al-Sukkari area in Aleppo city.

In the meantime, a unit of the Armed Forces killed a number of terrorists near the Fifth Industrial School in al-Salehin area, including terrorist Mohammad Abu Dan, leader of an armed terrorist group.

Units of the Armed Forces cleared several areas in the countryside of Kasab in Lattakia province of the armed terrorist groups, inflicting heavy losses upon their members.

A source in the province told SANA reporter that the army units cleared a large part of al-Frunloq forests and the areas of Jabal al-Nasr, Nabei al-Mur and the broadcasting station in Kasab of the terrorists who caused huge damage to these areas.

The source added that the Armed Forces are continuing their mission in pursuing the vanquished terrorists.