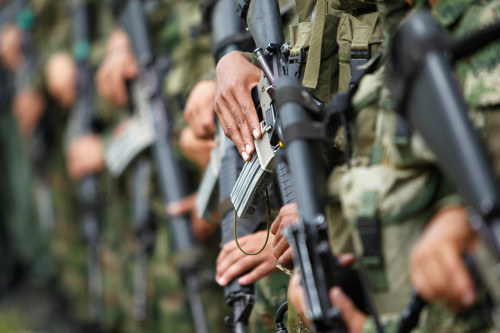 Syria: Palestinians instead of radical Islamists?

Syria: Rotation of the terrorists – the new plan of the West?

The recent developments in Syria and also in the Gaza Strip indicate pretty clearly that the United States in its “democratization strategy” is now gradually trying to focus on other forces than on out of control radical Islamists.

Apart from the establishment and composition of the in Doha (Qatar) conjured so-called “Syrian National Alliance” (SNA) is the removal of General David Petraeus from the post as the CIA director here also a hint that leads to such a conclusion.

The crafty “asymmetric” warrior, who gets steadily commanded by the Americans in special operations overseas, is precisely the figure who stands behind the strategy of a warfare with foreign hands – namely, by using diverse as “al Qaeda” generalized radical structures. Previously this was the technology that should also lead to a collapse in Syria.

His quite tough neutralisation was reminiscent of the Causa Strauss-Kahn: the sultry journalist Paula Brodwell who was allowed to come near to his body, secret documents, timely released facts – all this does not only look like an adultery. Would this scandal not be profitable for something, then the matter would already be long forgotten.

For example, Dick Cheney had once actually wounded (shot) his hunting companions (who has then died of a natural “heart attack”, of course) – well, things happen, it was reported and also immediately forgotten. But the scandal with Petraeus is suitable and useful – therefore all the details, the top ranking in the headlines, the pictures and the public humiliation, where Petraeus has to expect at best a dishonourable discharge, at worst a process.

The aggressors have in fact no more time. Namely, the time is running away for the aggressors. The previously used Islamists Brigades defy largely every control, in fact, they are out of control – for example, the Al-Nusra front and Ansar al-Islam have explicitly not joined the ordered ceasefire for the Islamic Festival of Sacrifice which has been ordered by the “Free Syrian Army” (FSA); moreover, they have not approved the “Syrian National Alliance” as “legitimated” – and it is therefore the time that they are replaced by more compliant and controllable forces.

Hence, therefore the travels of the King of Jordan and the Qatari emir to Gaza, and so the massive recruitment-attempts in the Palestinian refugee camps in Syria itself – Yarmouk and others near Damascus – of which ANNA-News has e.g. reported.

Especially since Hamas, which probably is meant for the role of the mobilization- and recruitment organization, instantly has fired a part of the financial assistance for them in the form of rockets towards Israel (it`s only common), however, the link between the events in Gaza and the recent visits to there by several illustrious leaders is hardly to be overlooked.

Nevertheless, the gradual squad rotation will gradually happen in the front line but in Syria – the money of the Arab monarchs will fire this mechanism up. The radical Islamists that are now located on site get allotted a perspective in which they will be partially will get wiped out in Syria, partially move in another direction, and also for this situation, there is already enough information and opportunities:

The Fatwa of Yusuf al-Qaradawi (chief ideologue of the Muslim Brotherhood and the alleged spiritual supervisor of the “Syrian National Alliance”), according to which Russia is “enemy number one” of the Muslims, the early Olympics in Sochi, the North Caucasus – all that is not far-fetched.

Recently, on 8 November, Stratfor has namely published an article called “The Caucasus Emirate Goes Global“. So suddenly, somebody remembers this emirate in the context of the current events in this Emirate, and the author, Gordon Hahn, expresses his concern that this emirate expands into a global structure, which is no longer only threatening the Caucasus, but also the surrounding regions.

An empirical fact: as soon as the United States does express its concerns about the safety of a region that is far away, this is the beginning of a destabilization of the situation on site. Hahn has quite right deduced that the year 2014 – so the year of the Olympics in Sochi – is particularly critical for Russia in terms of the security situation.

The international reputation that you can earn with the implementation of the Olympics is worth a lot – and cost also very much; of course, Russia is thereby alarmed that there should be the hearth of such a global threat – not far away from the venue.

Gordon Hahn refers directly and unequivocally to these circumstances and offers the United States factual to take advantage of the situation and to express their concern about the security in the region, and if possible, already before the Russians will perform the Winter Olympics.

In the worst case, a so-evolving scenario can even lead to the termination or cancellation of the Olympics because of the safety – because the safety of the athletes and the tens of thousands of tourists can no longer be guaranteed to one hundred percent by anybody.

For Russia, the collapse of the masses of visitors could become a big blow, because that would show that the government is helpless and also unable to provide and guarantee security in the field of their own country.

Therefore, one is able to assume, that it is quite possible that the United States will make every effort to take a maximal advantage of their “concern” about the situation and really will try to create a threat to the security of the region, especially as it was already reported a few weeks ago that several rebel fighters and “mujahedeen” penetrate (e.g. over Georgia) from the South on Russian territory; as well as the detained Chechen warriors in Aleppo and other Syrian cities are an hint about an active exchange of know how.

No matter how you look at it, the events of recent weeks lead exactly to these conclusions. Syria is still in front of the gun barrels of the “process of democratization”, but gradually the situation in the North Caucasus and possibly other regions of Russia are also “fanned”.

Into this scheme, also the recent events in Kazan and the arrests of “activists” of Hizb ut-Tahrir in Moscow, which have already begun with a blatant and active recruitment of cannon fodder in central Russian regions, do match.

Anyway, there is fertile ground for it.