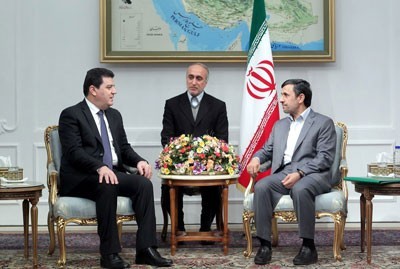 Iranian President Mahmoud Ahmadinejad said that the west and some regional countries are evidently involved in supporting terrorism in Syria.

The remarks came during his meeting with Syria’s Ambassador to Iran Adnan Mahmoud on Saturday during which when he received his credentials.

President Ahmadinejad said that the falsity of the west’s allegations concerning democracy is evident now, adding that the western tools in the region are allocating financial resources to support terrorists in Syria.

Ahmadinejad expressed faith that the Syrian and Iranian peoples will be victorious despite the hard circumstances, reiterating the need to enhance bilateral relations in all domains to achieve the interests of the two friendly peoples.

For his part, Ambassador Mahmoud said that the priority is to bolster economic relations between the two countries and confront the economic war and the unjust sanctions imposed on the Syrian people.

Mahmoud noted that the countries’ potential is strong enough to face the US-western plots and their regional tools, who are supporting terrorism in the country.

The meeting was attended by Iranian Deputy Foreign Minister Hossein Amir Abdullahian and senior officials from the Iranian Presidency.