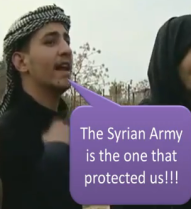 There have been more than a dozen of massacres that took place so far during the Syrian crisis. The last sad episode is that of Haswiya in Homs were 106 civilians – including men, women, and children – were shot, stabbed, and some possibly burned to death by armed gunmen.

The initial reporting by the Mainstream Media (MSM) relied solely on the British-based ‘Syrian Observatory for Human Rights’, an entity with an agenda and whose only purpose is not to report about crimes in Syria but rather to delegitimize the Syrian government by attributing massacres to its forces.

After similar massacres in Houla, Daraya, Karm al-Zeitoun, Aqrab, and others, Arab and Western MSM news outlets have almost always initially reported that it was government forces who committed those crimes. When eyewitnesses and/or crime participants later give their testimonies, these reports turn out to be false. Every single time, the so-called ‘Syrian rebels’ are the ones that are really directly responsible for these massacres.

This report from ITN News, which also aired on CNN (unusual airing by a NATO channel), shows that residents of the town refute those claims and say it was an al-Qaeda linked group, most likely Jabhat al-Nusra (Nusra Front), that committed the massacre against defenseless civilians.

1 thought on “Who really committed the massacre in Homs? ~ (Video)”