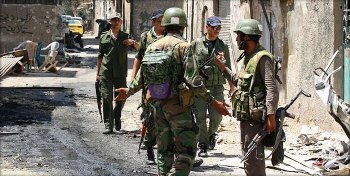 May 24, 2013  –  Syrian Provinces – SANA – In the framework of continuing military operations in al-Qseir, the armed forces eliminated terrorists and destroyed terrorists’ dens a vehicle equipped with a heavy machine gun north of the local stadium.

A military source told SANA reporter that a terrorists’ den was destroyed near the industrial school as other terrorists’ gathering were targeted in the west and the south neighborhoods where many terrorists were killed or wounded.

The source added that another army unit targeted an armed terrorist group in al-Dab’a Airport after escaping from al-Qseir, leaving most of its member killed or injured.

The source added that terrorists’ dens were destroyed in al-Hamidieh town with the weapons and ammunitions inside in al-Qseir and its countryside.

An army unit seized a vehicle equipped with heavy machinegun and RPG rounds in al-Qseir countryside.

An official source said that large amounts of munitions were also seized during the operation, adding that the army also arrested two terrorists.

A military source told SANA reporter that the army seized a tunnel used by terrorists to move from the area of al-Wa’r into Homs city, adding that large amounts of weapons ammunition were also seized in it.

An army unit eliminated the members of a terrorist group who were committing murder and looting acts on al-Ghassanyeh-al-Dmeineh al-Gharbyeh road in al-Qseir countryside and destroyed their machineguns-equipped vehicles.

The army unit eliminated terrorists’ gatherings inside al-Rastan city and in al-Tayba town.

Earlier on Thursday, the army restored security and stability to al-Waer farms after eliminating the last terrorists’ gathering in the area.

The source also said that the an army unit confronted a terrorist group infiltrated from the Lebanese territories and tried to attack police stations on the border in Tael Hanash and agricultural development, killing seven terrorists and wounding several others, while the rest fled away.

A large number of terrorists were killed and wounded as their equipment and criminal tools were destroyed. 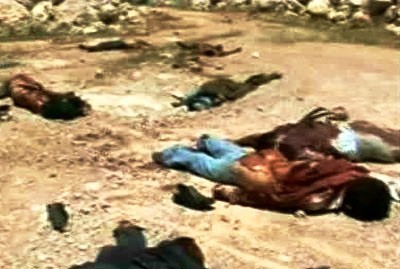 A military source said a unit of our armed forces targeted Jabhat al-Nusa-linked terrorist group leaving its members killed or injured in Adra, in Damascus countryside.

The source added that the operation also resulted in the destruction of weapons, equipment and tools were in the terrorists’ possession.

Units of the armed forces carried out operations against terrorists’ dens and gatherings in several towns in Damascus Countryside, inflicting heavy losses upon them.

An official source told SANA that the army units killed several terrorists in Tall Kurdy farms in Douma city, including the leader of the so-called “al-Islam Brigade” and a number of his group, Hussam al-Baghdadi, Ahmad Karnaba.

The source added that another army unit dismantled an explosive device weighing 25 Kg planted by terrorists near the  water Establishment in Harasta, killing a number of terrorists, including Ayham al-Bayrouni and Omar Hashash.

Meanwhile, another army unit dismantled 8 explosive devices weighing between 15-25 Kg planted by terrorists on the road leading to al-Rihan in the Eastern Ghouta. Ahmad Idriss, leader of an armed terrorist group, and most his members group were identified among the dead terrorists.

In Zamalka, a unit of the armed forces destroyed a hideout for weapons and ammunition and killed a number of terrorists, including Muhammad Raslan and Bashar Krayha, leader of an armed terrorist group.

A unit of the armed forces destroyed a den of the armed terrorist groups affiliated to “Jabhat al-Nusra” in Aqrab town in Hama countryside, killing and injuring several terrorists, including non-Syrian terrorists.

An official source in the province told SANA that among the dead terrorists were Adib Hamdan from Lebanon, Yousef al-Hajj Muhammad from Jordan and Abdulfattah al-Kawasmi, Abdulqasem al-Alqan, Najeb Merza and Moua’z al-Soufi from Libya.

A Large Number of Terrorists Killed in Idleb Countryside

Units of the armed forces continued operations against terrorists in Idleb countryside, inflicting heavy losses upon them.

A military source told SANA that an army unit targeted terrorists in Sermin, killing 23 terrorists and injuring 32 others, in addition to destroying their equipment.

The source added that other army unit targeted terrorists’ dens and gatherings in Maart Dabsa and Ariha, killing and injuring a large number of terrorists. Ahmad Sheikh Muhammad, Ismael Hassan, Zakaraya Barbour, Abdullah Barbour and the Libyan Omar al-Brayki were identified among the dead terrorists.

Basim Shaaban, leader of “Jabhat al-Nusra” group in Taftanaz was killed, according to teh source.

An official source said that army units carried out a qualitative operation against the terrorists’ dens in Sarmin, killing numbers of terrorists and destroying their heavy machineguns.

The source added that terrorists were killed in Maardebseh town and the farms surrounding Ariha city. The Libyan terrorist Omar al-Barki was identified among the dead.

Attempt to blow up two explosive devices planted by terrorists near Bsankoul on Ariha-Jisr al-Shughour road was thwarted.

A military source told SANA that the army units destroyed terrorists’ dens in al-Shmaisa, al-Qasatil, al-Bashoura and Myzian, killing and injuring a number of terrorists, including Maher Tabaa, Isam Karboutli and Mazen al-Hajj from Egypt, in addition to destroying cars loaded with weapons and ammunition.

The source added that other army units targeted terrorists’ gatherings in al-Sukari, al-Kbeir, Droushan and Jub al-Ahmar, killing and injuring scores of terrorists, including al-Safi al-Qurabi from Libya, Ahmad al-Kalsi from Saudi Arabia, Abdullah al-Khmais and Muhammad al-Akou, in addition to destroying their equipment.

An Armed Forces unit targeted terrorist gatherings in the areas between al-Daghmashliye and al-Sukkariye and between Ghamam and al-Sukkariye, eliminating a large number of terrorists and destroying their equipment.

units of the armed forces  destroyed two bulldozers loaded with explosives and anti-aircraft gun in the area surrounding the Central Prison in Aleppo and killed and injured several terrorists.

The source told SANA that other army units killed a large number of terrorists on al-Maslamiya road and destroyed their equipment which were used in targeting the Central Prison.

The source pointed that an army unit destroyed 23 mm caliber anti-aircraft gun  near Saif Factory, in addition to destroying other vehicles along with weapons and ammunition inside them to the east of the Prison.

Meanwhile, another army unit killed and injured a number of terrorists, in addition to destroying their equipment on Manbij- al-Bab road and in Qubtan al-Jabal.

In Aleppo city, army units clashed with the armed terrorist groups in al-Layramoun and Bouayden roundabout, inflicting heavy losses upon them.

An Armed Forces unit clashed with a terrorist group near the park in al-Jbailiye neighborhood in Deir Ezzor city, eliminating 8 terrorists and injuring 20 including Mohammad Hamed al-Abdelrazzaq.