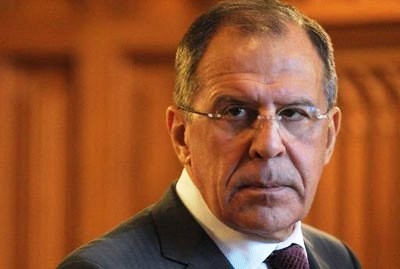 Moscow – SANA (Ghossoun/H. Said) – Russia’s Foreign Minister Sergey Lavrov said that his country is waiting for Turkey to provide clarification about arresting Jabhat al-Nusra-linked Syrian gunmen with sarin gas in their possession in the Turkish territories.

Speaking at a press conference in Moscow Friday, Lavrov expressed Russia’s disappointment that the UN did not quickly respond to the demand of an investigation into the incident of chemical weapons use in Khan al-Assal area near Aleppo.

“We feel great disappointment with the political games of the UN General Secretariat that it failed to respond to this demand with the possible accuracy and speed,” said Lavrov.

“They instead presented conditions that are, according to us, illogical and outside the rules of dealing,” he added.

“We have repeatedly and frequently warned that this issue could constitute different provocations, and therefore we insist on accurate search of any act involving chemical and toxic materials,” Lavrov told the reporters, adding that Moscow has welcomed the Syrian government’s demand of sending an expert group to investigate into the incident which took place near Aleppo city.

Lavrov pointed out that the Russian Foreign Ministry’s yesterday statement commented on the issue of the Jabhat al-Nusra gunmen who are detained in Turkey, saying “We are waiting for the Turks to provide information on the results which they came out with quickly and in full.” He stressed the need for a thorough investigation into such cases.

Earlier, the Russian Foreign Ministry called for accurate investigation regarding the disturbing news on seizing extremists carrying sarin gas in Turkey to ward off attempts by terrorists to use hazardous substances against civilians in Syria and to instigate an external interference.

He pointed out that these provocations aim “to open the door to armed foreign intervention in Syria, stressing that Russia sees its is totally impermissible to use chemical weapons.

“The news from Turkey unfortunately confirms that these warnings are not baseless,” Lukashevich added, stressing the importance to conduct an investigation to “know all the details of what happened to ward off the terrorists’ attempts to use chemical weapons against the civilians and instigate foreign intervention in Syria.”

Lukashevich recalled that the Syrian government has repeatedly stressed that it will not use chemical weapons, if it possesses any, inside Syria.

The Turkish media reported earlier that the Turkish intelligence seized 12 persons from Jabhat al-Nusra with links to al-Qaeda in Adana city in southern Turkey and confiscated 2 kg of toxic sarin gas, ammunition, several documents and digital information were in their possession.

Russian Foreign Ministry source said Friday that Russian Deputy Foreign Minister, Gennady Gatilov, will represent the Russian side at the preparatory consultations for Geneva Conference on Syria scheduled to be held on June 5.

In turn Gatilov told Interfax news agency that he will represent the Russian side in this meeting.

Earlier, the United Nations’ Media Office announced that Under-Secretary-General for Political Affairs, Jeffrey Feltman, and UN Envoy to Syria, Lakhdar Brahimi, will take part in the trilateral meeting between Russia, United States and the United Nations to prepare for the international conference on Syria in Geneva.

In turn, U.S. State Department spokeswoman, Jen Psaki, said that Washington will be represented at this meeting by Under Secretary of State, Wendy Sherman, and Acting U.S. Assistant Secretary of State for Near Eastern Affairs, Elizabeth Jones.

Holding such meeting was agreed upon during the talks recently held in Paris between Russian Foreign Minister, Sergey Lavrov, and his US Counterpart, John Kerry,

The two Ministers announced their plan to hold an international conference on Syria with the participation of representatives from the government and the opposition at the end of their talks in Moscow on May 7.

SyrianFreePress.net Network reloaded from SANA at