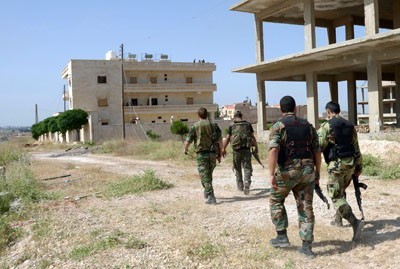 13/06/2013 – Syrian Provinces, (SANA) – In the framework of the continuous military operations in Damascus Countryside, the armed forces on Thursday destroyed a number of dens for armed terrorist groups in many areas and killed several terrorists.

SANA reporter quoted an official source as saying that an army unit destroyed two mortars and a heavy machinegun for an armed terrorist group in al-Dhiyabiyeh town. A number of the group’s members were killed, among them Mus’ab al-Dandan was identified.

Another army unit destroyed a terrorists’ den in al-Oub farms in Douma, killing all of the terrorists in it. Subhi al-Airout and Mahrous Merei were identified among the dead.

In Adraa area, a unit of the armed forces continued chasing terrorists affiliated to Jabhat al-Nusra and destroyed a den for them along with all the weapons and ammunition inside it, according to the source.

Other army units, the source added, clashed with terrorists near al-Manasher roundabout in Joubar, leaving any of them killed and injured, including Abdul-Mune’m al-Teir.

A hideout including weapons and ammunition was destroyed in the framework of a special operation carried out by an army unit in Halboun town in al-Tall area. The operation resulted in killing a number of terrorists, including Qassem al-Ma’rouf and Abdo Kousa.

In al-Nabek area, an army unit chased a group of terrorists from Jabhat al-Nusra who have been committing acts of sabotage and looting. Numbers of the terrorists were killed.

A den for terrorists, along with a heavy machinegun, was destroyed in al-Husseiniyeh town. All of the terrorists were killed, among them were Amer al-Shalal and Bahaa Khalifieh.

A citizen martyred, three others wounded in explosive device blast in Hasaka

A citizen was martyred and 3 others were wounded when an explosive device that was planted by terrorists went off in Tall Hajar neighborhood in Hasaka city.

An official source told SANA reporter that terrorists planted an explosive device on the road leading to Adnan al-Maliki school, causing the martyrdom of a citizen and the injury of 3 others, in addition to material damage in the area.

A dispute broke out between two terrorist groups over dividing the stolen money and materials in al-Rastan city in Homs.

An official source told SANA reporter that the dispute caused the killing of most terrorists, including Midyan Hawlo and Iman Abaid the leaders of the two terrorist groups.

Units of the armed forces clashed with armed terrorist groups in several areas in Aleppo and its countryside, killing many terrorists and destroying mortars and heavy machineguns.

An official source told SANA reporter that 9 terrorists were killed in Kafr Khasher and Tenneb areas and mortar they used in targeting Minnegh military airport was destroyed.

The source noted that units of the armed forces killed a number of terrorists in Tall Raf’at area and to the north of Azaz and destroyed a large number of heavy machineguns.

An army unit destroyed a number of gatherings for Jabhat al-Nusra terrorists in the villages of Andan, Hreitan and al-Tamoureh and the city of al-Bab, according to the source.

Large amounts of weapons, including heavy machineguns, and ammunition were destroyed in the operations.

In the surrounding of Aleppo Central Prison, a unit of the armed forces clashed with terrorist groups near al-Jandoul roundabout that had planned to launch an attack against the Prison.

The army members killed and injured many of the groups’ members and destroyed a mortar they had with them.

Other army units continued hunting terrorists and destroyed their heavy machineguns on the road linking the thermal station and Deir Hafer in the eastern countryside of Aleppo.

Meanwhile, an army unit foiled an attempt by an armed terrorist group to infiltrate into Tall Shgheib and killed 7 of its members and seized their weapon, while other terrorists were arrested.

SANA reporter quoted the source as saying that a gathering for terrorists from Jabhat al-Nusra was destroyed in Ourm village in the western countryside of Aleppo.

The source noted that most of the terrorists were of foreign nationalities.

Units of the armed forces clashed with terrorists in several areas in Khan al-Assal and inflicted heavy losses upon them.

In the city of Aleppo, a number of terrorists were killed and others were injured in the areas of al-Sheikh Maqsoud, Bani Zaid, Bustal al-Qasr and al-Amiriyeh.

A den for an armed terrorist group was destroyed at al-Haidariyeh roundabout along with the weapons and ammunition inside.

Army Units Kill Terrorists in Homs and its Countryside

Army units continued crackdown operations against terrorists in Homs and its countryside, killing and injuring a number of them, and discovered tunnels that the terrorists used for movement and storing weapons and ammunition.

A military source told SANA that an army unit eliminated members of an armed terrorist group who were attempting to plant an explosive charge in al-Dawar area on Homs-Palmyra road, and confiscated a PKC machinegun, and automatic rifle and RPG launcher charges.

The source added that 18 tunnels were discovered during mopping up operations in al-Qseir city. Scores of explosive devices of various weights were discovered in al-Dmeineh al-Gharbieh town to which the army restored security and stability last week.

Another unit clashed with an armed terrorist group that blocked roads in Handoura area on Homs-Palmyra road, killing and injuring all its members.

The Syrian army’s operations resulted in killing tens of terrorists from Jabhat al-Nusra and the so-called “al-Farouq battalion” and destroying a rocket launcher and RPG launchers.

The military engineering units continued operations to secure Salba station eastern al-Salamieh as the Syrian army tightened control over it.

The military engineering units dismantled 50 explosive devices weighing from 50 to 100 kgs planted by terrorists in the station.

The source mentioned that other army units destroyed a den for an armed terrorist group located between al-Mzeirib and al-Yadoudeh towns.

Other army units killed and injured a number of terrorists who had been committing acts of looting, killing and vandalism in the town of Jassem and destroyed their weapons and ammunition.

The Army Regains Control over Abo Hbeilat Village in Hama

Units of the armed forces on Thursday restored security and stability to Abo Hbeilat village in the eastern countryside of Hama.