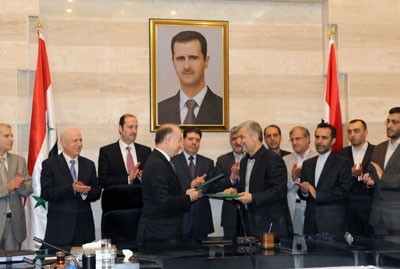 Al-Halqi, heading a meeting of the committees in the presence of the special Advisor to the Iranian Foreign Minister for Economic Affairs Hassan Kazemi Qomi appreciated the efforts exerted by the two sides in order to speedup implementation of the agreements between the two states in the fields of health, economy and development.

He underlined the need for committing to the time table set for the implementation of the agreements, particularly in regards to the rehabilitation of the electric power generation and supplying the networks with 300 Mega Watt per hour.

The Prime Minister affirmed the government’s commitment to provide the basic needs for the citizens in light of the approach of the holy month of Ramadan.

For his part, the Iranian Advisor said that the agreements between the two sides will be put into effect as soon as possible as Iran will start providing Syria with the basic material of food and medicine as well as oil products.

At the meeting conclusion, the two sides signed a joint minutes in the fields of petroleum, electricity, reconstruction of a number of stations sabotaged by the armed terrorist groups, providing Syria with medicines, hospitals’ equipment. Both states also agreed to exchange the nutritional products including the olive oil, citrus, chicken and flour.

In a statement following the meeting, Qomi said that economic relations with Syria have been discussed during the sessions covering the sectors of health, oil, electricity and the exchange of goods in addition to granting Syria credit loans with 3.5 billion USD.