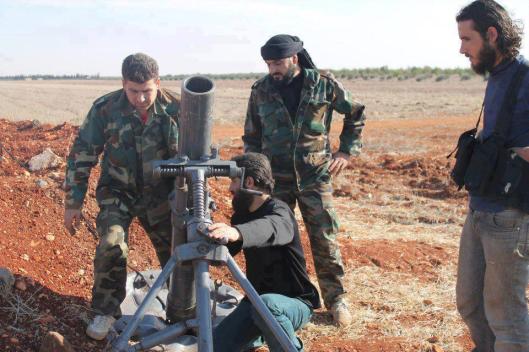 People martyred and injured in Homs due to mortar shells

Terrorist gangs have carried out series of attacks against civilians residents in Homs city, what resulted in martyrs and injuries.

The attacks have been initiated along with Syrian Army’s advance in the neighborhoods of Homs such as al-Khalidia and Bab Hood, where insurgents have shelled a local-made missil on Radio and TV center in Karm al-Shami area.

Moreover, militants have fired tens of the mortar shells on Ekrama and al-Zahraa neighborhoods, what resulted in many martyrs and injuries.

A booby trapped car has been detonated in al-Waer neighborhood claiming the lives of civilians.

Terrorists attack the Radio and TV Center in Homs

Two workers at the Radio and TV Center in Homs were injured due to a mortar shell fired by terrorists on the center located in Karm al-Shami neighborhood.

A mortar shell fell on the building of the center, causing the injury of two workers and material damage in the building.

Local source added that another mortar shell fell on the Vegetables Market in al-Khder neighborhood, causing the injury of a citizen and big damage in the cars and the residential buildings.

Another mortar round fell on a residential building near Mar Ephram Church in al-Adawieh neighborhood, causing no injuries or damage.

4 thoughts on “Terrorists attack the Radio and TV Center in Homs, fired mortar shells and detonates a trapped car in Homs”