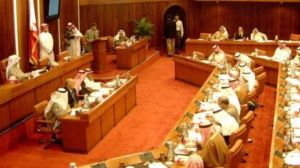 Is Bahrain moving farther and farther from “BASIC RIGHTS?”

Bahrain parliament has reportedly approved a bill banning all protests in the capital, Manama, as the Al Khalifa regime continues its crackdown on anti-government demonstrations.

The move, which coincides with a special parliament session to discuss growing violence and anti-government protests in Bahrain, comes as the country’s opposition is preparing for mass demonstrations scheduled to be held on August/14.

On July 22, Bahraini police forces raided the houses of anti-regime demonstrators in a number of villages across the country, arresting dozens of people.

The Bahraini uprising began in mid-February 2011, when the people, inspired by the popular revolutions that toppled the dictators of Tunisia and Egypt, started holding massive anti-government demonstrations.

The Manama regime launched a brutal crackdown on the peaceful protests and called in Saudi-led Arab forces from neighboring states.

Scores of people have been killed in the crackdown, and the security forces have detained hundreds, including doctors and nurses.

The Bahrain Independent Commission of Inquiry said in a report in November 2011 that the Al Khalifa regime had used excessive force in the crackdown and accused Manama of torturing political activists, politicians, and protesters.

The protesters say they will continue to hold demonstrations until their demand for the establishment of a democratically elected government is met.