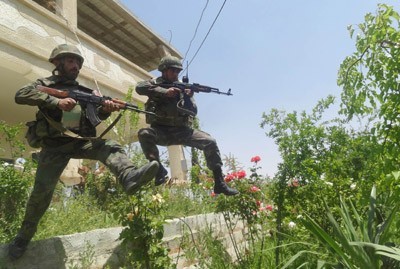 Units of the armed forces on Tuesday killed and wounded members of armed terrorist groups in Aleppo and its countryside and confronted attempts by terrorists to infiltrate into safe areas.

SANA reporter quoted an official source as saying that an army unit targeted vehicles carrying weapons and ammunition for terrorists on Atareb-Daret Ezzeh- Orum al-Sughra in the southwestern countryside of Aleppo.

The source noted that the weapons were bound to provide back-up to the terrorists in Khan al-Assal area.

Another army unit, the source added, destroyed several gatherings for terrorists in Atareb and the journalists residential compound.

SANA reporter said numbers of terrorists who had been committing acts of looting and blocking roads were killed on the roads of al-Raqqa and al-Bab-Aleppo and in Ein Daqna, Tall Raf’at, Deir Hafer and Mar’anaz. The terrorists’ weapons and equipment were destroyed.

Units of the armed forces eliminated terrorists’ gatherings in the western countryside of Aleppo, while another army unit clashed with terrorists who infiltrated into Dahret Abdrabbah in al-Lairamoun neighborhood and killed others in al-Ma’amel area.

A number of terrorists’ dens in al-Alqamiyeh and Minnegh villages were destroyed.

Units of the armed forces thwarted attempts by terrorists to infiltrate into safe areas in the neighborhoods of al-Rashdin, Salh-Eddin, al-Amiriyeh and Bustan al-Qasr in the city, killing and injuring scores of the terrorists.

In the meantime, the army units carried out a series of operations against the terrorists’ gatherings in the Eastern Ghouta and a number of towns in Damascus Countryside.

An official source told SANA reporter that units of the armed forces clashed with terrorist groups in several areas in Harasta city, killing and injuring many terrorists, among them mohammd Nour Khashaneh was identified.

An army unit also destroyed a terrorists’ gathering to the east of Masraba town in Harasta, killing a number of terrorists including Mohannad al-Saour.

Several terrorists were killed with their weapons and equipment destroyed in Erbin town, according to the source.

The source added that army units hunted down terrorist groups in Adra al-Balad town and killed many of their members. Jaber al-Sheikh was identified among the dead.

A chain of operations were carried out in the farms surrounding the towns of Deir Salman, al-Mansoura and Sakka in which many terrorists were killed and others were injured, including Mahdi al-Qajma’i.

Army units clashed with terrorist groups in al-Ghezlaniyeh area. The clashes resulted in destroying heavy machineguns and various types of weapons after killing a number of terrorists.

In the southern countryside of Damascus, army units continued pursuing terrorist groups and targeting their gatherings in the areas of al-Sayyeda Zainab, al-Ziyabiyeh and Hijjeira.

Clashes in Hijjeir, however, resulted in killing a number of terrorist groups’ members, including Hani Mitleq.

An army unit foiled a terrorist group’s infiltration attempt from Arsal in Lebanon into the Syrian territories through Khirbet Hamam site in the southern countryside of al-Qseir in Homs.

Several dens and gatherings for terrorists were destroyed in the neighborhoods of al-Qarabis, al-Warsheh, Bab Hood, al-Abraj, Jouret al-Shayah, al-Waer, Wadi al-Sayeh and al-Hamidiyeh in the city of Homs.

An army unit repelled armed terrorist groups that tried to infiltrate from al-Dar al-Kabira and al-Ghasbiyeh areas towards the villages of al-Dweir and al-Muhajjarin in northern Homs, leaving many of their members dead and injured.

In another context, an official source in the province said an army unit destroyed a number of terrorists’ gatherings in Talbiseh, al-Rastan, al-Ghanto and al-Dar al-Kabira, killing many terrorists.

Among the terrorists killed in Talbiseh were Adnan Shahoud, leader of a terrorist group, Mohammad al-Mahmoud and Mahmoud al-Deikh.

In another context, engineering units foiled an attempt by an armed terrorist group to detonate 13 roadside bombs in Hannoura area in the city of Palmyra.

SANA reporter quoted an official source as saying all the roadside bombs, which had been planted on Palmyra-Homs highway, were dismantled, noting that the bombs weighed 35-50 kg and were to be detonated via cell phones.

Army units, in a series of operations carried out yesterday, inflicted heavy losses upon terrorists in Idleb countryside.

A military source told SANA that several headquarters for Jabhat al-Nusra terrorists and a factory for manufacturing rockets were destroyed as a number of terrorists killed in Ma’arrat al-Nu’man in Idleb countryside.

The source added that an army unit eliminated gunmen in Kafrshillaya and foiled terrorists’ attempt to detonate 62 explosive devices planted on the roads of the town.

In the same context an army unit destroyed weapons including 14.5 mm machine guns in Mara’ian town while another unit killed a number of terrorists in Blashtoon and al-Maghara and destroyed their criminal equipment and weapons.

Terrorists linked to Jabhat al-Nusra were eliminated in Kansafrah town and weapons used by gunmen in their attacks on the people in the region were destroyed.

An Army unit targeted the headquarters of the so-caled “Sharia tribunal” in Saraqeb in Idleb countryside, eliminating two extremely dangerous terrorists: head of the tribunal Abdullah Barbour and his bodyguard Mohammad Mufid al-Kheshen.

Army units also destroyed a terrorist hideout in the town, resulting in the elimination of many terrorists including Qassem Mohammad Hammad.

An Armed Forces unit clashed with terrorist groups in Daraa, resulting in the killing or a number of terrorists including Mohammad Khalil al-Hussein al-Mahamid, the leader of a terrorist group called “Liwa’a Tawhid al-Janoub.”

Another unit eliminated a number of terrorists in the town of Basr al-Harir, including Hamza Jihad al-Shara’a.

An Army unit clashed with a terrorist group affiliated with Jabhat al-Nusra in the salt mine area in Deir Ezzor, inflicting heavy losses upon the terrorists.

A Syrian Arab Army officer leaves his weapon aside to interview insurgents alon, face to face

thanks to Breakingnews video reporters

1 thought on “Infiltration attempt from Lebanon thwarted, Terrorists infiltrating into safe areas in Aleppo repelled and neutralized in many areas”