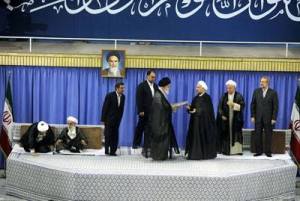 President Rohani pointed out that the presidential elections, conducted last June, did succeed because of the Iranian people’s support.

He stressed that the Islamic revolution has shown great maturity and stability, adding that the people of Iran reaffirmed the principles of the revolution in the elections.

Iran’s Supreme Leader Sayyid Ali Khamenei, for his part, said the Iranian people have declared permanent support to Palestine cause, calling upon the Iranians to be strong and never give up while the enemies are going on with their plots against them.

Iran’s new President Hassan Rohani has taken the oath of office at the Iranian Majlis (Parliament), one day after being endorsed by Leader of the Islamic Revolution Ayatollah Seyyed Ali Khamenei, Press TV reports.

Iranian lawmakers and senior officials as well as foreign dignitaries attended the swearing-in ceremony in Tehran on Sunday.

Rohani, whose four-year tenure officially started on Sunday, takes over from Mahmoud Ahmadinejad.

“I think, since the beginning of the revolution [until now], none of the swearing-ins has been as important as [the one] this time. In none of the previous ceremonies did we see so many foreign dignitaries and foreign officials. And this is because of Mr. Rohani’s slogans of improving ties with the world based on mutual respect,” political expert Ghodrat Ali Heshmatian said.

At the end of the ceremony, Rohani also unveiled the proposed list of nominees for his cabinet.

“As the people created a political epic following their vote, a real enthusiasm has been created in the society and now everybody wants the problems of the country to be solved,” said a representative of clerics in Majlis, Jafar Fathalizadeh.

Rohani won Iran’s June 14 presidential election with 50.7 percent of a total of over 36 million ballots. The voter turnout in the election was 72.7 percent.