Syria has called on the UN Security Council and the UN Human Rights Council to put aside double standards and commit themselves to fighting terrorism.

Bashar al-Jaafari, Syria’s permanent envoy to the UN, said on Friday that certain countries including some members of the international body have prevented the Security Council from condemning the atrocities committed by Takfiri militants in Syria.

Jaafari said countries sending weapons to the militants and giving them political support are partners in terror.

Syria has been gripped by deadly turmoil since 2011. According to the United Nations, more than 100,000 people have been killed and millions of others displaced in the violence.

Reports indicate that Western powers and their regional allies – especially Qatar, Saudi Arabia, and Turkey – are supporting the militants operating inside the country.

President Bashar al-Assad said on August 5 that Syria will strike terror “with an iron fist.” 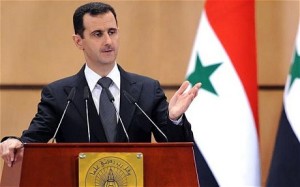