Alise has just “Tweeted” “As the US mulls response to use of chem weapons in #Syria, the “Administration cancels meeting with Russians on Geneva political process.” 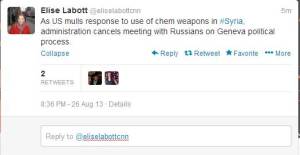 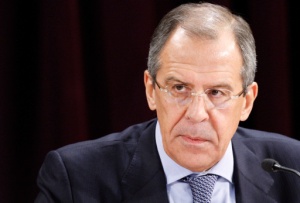 Moscow — Russian Foreign Minister, Sergey Lavrov said that the accusations leveled at the Syrian government of using chemical weapons are null and aimed at finding a pretext for using force against Syria.

”Washington, London and Paris have made official statements claiming that they have powerful evidence that incriminate the Syrian authorities, but have failed so far to substantiate their claims, ” Lavrov said during a press conference in the Russian capital, Moscow on Monday.

‘‘[They] are ratcheting up rhetoric and say a red line has been overstepped and that there should not be procrastination about it,” added Lavrov.

”These statements contravene the agreements reached by the G8 leaders during their summit last June which stressed that any case involving the use of chemical weapons must be investigated in detail and that the findings be submitted to the UN Security Council.”

”Today, those same participants in the summit are backsliding on the agreement and are in fact assuming the role of investigators and the role of the Security Council,” the Russian FM added.

Lavrov indicated that experts from Britain, France, Russia and other Western states have contested the veracity of the footages circulated on the internet to implicate the Syrian government of using chemical weapons, pointing to information that the footages had been published hours before the announcement of a chemical attack on August 21.

”Those who are seeking the use of force against Syria have not so far consented to an agreement reached between the Syrian government and UN experts for visiting the sites where an alleged chemical weapons attack occurred.”

”Why do these sides rebuff the agreements and claim they are overdue? And why did not our Western partners speak in the same fashion regarding an investigation into a chemical weapons use in Khan all-Assal area in Aleppo countryside last Spring?”

Lavrov said that media leaks on a use of chemical weapons coincided with preparations for a Russian-US new meeting to pave the way for the international conference on Syria due to be convened in Geneva in what was apparently ”intended to wreck the efforts for convening the conference .”

Lavrov added that the US is committed to the idea of convening the conference and is dealing with the Syrian opposition as revealed by a phone call with the US Secretary of State, John Kerry yesterday.

He called for coordinated steps to send signals to all opposition sides that there is no alternatives to settlement through political dialogue and Geneva 2.

Lavrov also called on the Syrian government and opposition to join efforts in the battle against terrorism, expressing conviction that efforts must be exerted to that end with the participation of the G8 and UN member states away from the threats of using force

”The use of force in Iraq and Libya has incurred dire consequences and there have been no security, stability or improvement in living conditions in the region. Quite the contrary; we are witnessing a state of unprecedented instability, and urge everyone to be patient and responsible and not to repeat the mistakes of the past,” Lavrov pointed out.