A young Navy veteran speaks out

against the U.S. plans for war on Syria

The author is a former Second Class Petty Officer in the U.S. Navy from 2007-20012 and served on the USS Fitzgerald and the USS The Sullivans. He is a March Forward! organizer in Los Angeles and is working to build anti-war actions locally. 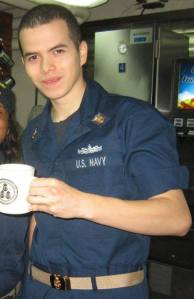 To my fellow sailors, shipmates and service members on active duty,

Many of you are now in the Mediterranean Sea near Syria to be used to carry out strikes against the country. 91 percent of the American public opposes these strikes. The Obama administration has failed to produce the “evidence” it says would justify them.

Do not be fooled into yet another war based on lies in the Middle East. The events that came to pass in Iraq and Afghanistan go to show that “defending freedom and democracy around the world,” as the Sailor’s Creed so wrongfully suggests is just a scheme to defend the interests of the rich at our expense. Syria—which is the only remaining country in the Arab World that is independent of Wall Street—is a huge prize for the oil and defense industries. But the billionaires who will profit don’t send their own children. They send us.

What we learned from the Iraq war in particular is that the U.S. government will fabricate intelligence, lies to our faces, and create a false story about “protecting civilians” to cover-up their true motives.

Don’t be a part of a war machine that kills innocent lives and separates entire families. Tomahawks and MK 45 rounds kill indiscriminately.

Do not be fooled into yet another endless watch, duty day, sleepless night and deployment in support of a corrupt system that constantly puts you in harm’s way. I ask you, is it really worth it?

I enlisted on July 20th, 2007 right out of high school in the hopes that I could peruse an education and travel the world through the Navy. The longer I was in, the more I realized that the community I was exposed to in the Navy was so far removed from the everyday lives of American civilians. Military spending always goes up. I was surrounded by billions of dollars’ worth of equipment, while schools have to fundraise for supplies and scholarships, whole cities were going bankrupt, and students struggled to pay their loans. I realized then that the system in place had left me no choice but to join the military. It was an illusion of choice when the reality is that more and more of us join to escape economic hardship. Then we are used to carry out missile strikes against other struggling people just like us all over the globe. It is a cycle that continues to fuel the war machine.

To me, patriotism is doing what you think is right for your country, not blindly following its government. It means that when we receive orders from corrupt high-ranking officers to launch strikes against Syria, against the will of the American people and against the will of the Syrian people, that it is our duty to refuse to carry them out.

Getting out of the military was the best decision I ever made, because the military tried to make me into a tool of oppression for other people around the world—but failed.

If I were at sea now, ordered to carry out this new war, I would refuse. You can too.

Disobey the bogus orders to launch a new war. Refuse deployments and reinlistments. Come home to your families and fight the real battle that has been waged by the government against its own people in the form of unemployment, poor education, high interest rates for college students, police brutality and the erosion of our civil liberties.

MORE AND MORE US MILITARY ARE COMING OUT AGAINST THIS PROXY WAR ON SYRIA BASED ON BOGUS MEDIA MANIPULATION AND FLAT OUT LIES!

“THANK YOU ERNESTO! YOU ARE THE TRUE DEFINITION OF A MAN OF COURAGE AND HONOR! I SALUTE YOU DEAR HERO!”

KNOW THAT THE MEDIA IN THE UNITED STATES WILL NOT GIVE THESE BRAVE SOLDIERS WHO WENT TO WAR ANY MEDIA ATTENTION AT ALL. MSM REFUSES TO ALLOW THIS TYPE OF INFORMATION TO THE AMERICAN PEOPLE.

MILITARY MOVEMENT TO END WARS “YOU CAN RESIST”

IRAQ AND AFGHANISTAN VETERANS RETURN THEIR MEDALS TO NATO

(FULL DOCUMENTARY – EMOTIONAL WORTH THE WATCH)

“THANK YOU TO ALL THESE TRUE HEROES” 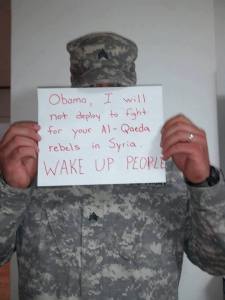 7 thoughts on ““To My Fellow (USA) Sailors: Refuse Your Orders to Attack Syria!””