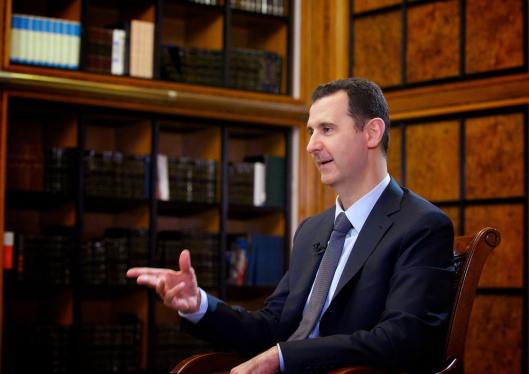 Interviewer: Why did Syria agree to the Russian initiative which proposes handing over its chemical weapons to the international community? Why so rapidly?

President al-Assad: Over 10 years ago, Syria presented the UN with a proposal for a WMD-Free Middle East; this was because the region is turbulent and has been immersed in wars for decades. Thus removing unconventional weapons would be rational in order to enhance stability, at that particular time the U.S hindered the proposal.

Firstly, in principle we strive for peace and stability therefore we do not perceive the existence of WMD’s in the Middle East to have any positive effect. Secondly, in relation to current developments, Syria as a state genuinely seeks to avert another war of lunacy on itself and countries in the region, contrary to the efforts of warmongers in the U.S who seek to inflame a regional war. We continue to pay the price of U.S wars, be it in geographically distant Afghanistan or neighbouring Iraq. We believe that a war on Syria shall be destructive to the region and embroil it in a quagmire of instability for decades or generations to come. Thirdly, and most remarkably, what was most encouraging was the Russian initiative itself, without which we would not have been able to pursue this path.

Our relations with Russia are founded on trust which grew during the crisis throughout the last two and a half years. The fact that Russia has proven itself to have an insight into events in the region with high credibility as a reliable major power encouraged Syria to work towards signing the Chemical Weapons Convention.

Without the Russian initiative, the chemical weapons matter would not have been deliberated with any other country

Interviewer: For example, the American President Barack Obama and his Secretary of State John Kerry stated that Syria’s acceptance of the Russian initiative to place the chemical weapons under international observation only derived from threat of missile strikes. Is this true?

President al-Assad: This is American propaganda; Kerry, Obama and the American administration seek to appear victorious, as if their threats yielded success. This is insignificant to us; what matters is for the decision to be based on Syria’s convictions and a significant Russian role. Only weeks ago, the American threats of a military strike were not for disarming Syria of WMDs, but based on American allegations regarding the use of chemical weapons. The Americans began to mention this not before, but after the G20 summit. Furthermore the main catalyst in this move was the Russian initiative alongside our discussions with Russian officials. Without the Russian initiative, the matter would not have been deliberated with any other country.

Interviewer: Yesterday, statements circulated that Russia presented the US a plan for fulfilling the initiative on international control of Syrian chemical weapons. Would Your Excellency please explain what was discussed in terms of proposed steps?

President al-Assad: Over the forthcoming days, Syria shall send letters to the UN and the Organisation for the Prohibition of Chemical Weapons with the technical records necessary to sign the convention. Subsequently, work shall commence to sign the anti-chemical weapons convention which prohibits its production, storage or usage. I believe the agreement will come into effect a month after signing it and Syria will start submitting data regarding its chemical weapons stockpile to international organizations.

These are standard procedures which we shall adhere to, however it does not mean that Syria will sign the documents, fulfil the obligations and that’s it. It is a bilateral process aimed principally at making the US cease pursuing its policy of aggression against Syria and proceed in compliance with the Russian initiative. When we see the US genuinely working towards stability in the region and stop threatening, striving to attack, and delivering arms to terrorists then we will believe that the necessary processes can be finalised. From a Syrian perspective, we perceive that this is achievable and can be implemented; however this is not a single-track process. The only country capable of undertaking this role is Russia, due to the absence of trust and contact between us and the Americans.

Interviewer: Were the initiative to be implemented, which international body would the Syrian Arab Republic favour as the Organisation to control the chemical weapons? The situation in Syria is hardly ordinary.

President al-Assad: We believe that the logical and appropriate body is the Organisation for the Prohibition of Chemical Weapons. It is the only organisation that has the capability and experts which oversaw the implementation of this convention in all countries.

When we proposed a project on the elimination of WMDs in the region, the US opposed it

Interviewer: We all comprehend that Israel signed but has never ratified the Chemical Weapons Convention. Will Syria demand that Israel fulfils this requirement?

President a-Assad: When we proposed a project on the elimination of WMDs in the region, the US opposed it; one of the reasons was to allow Israel to possess such weapons. If we desire stability in the Middle East, all countries in the region should adhere to these agreements, and Israel is the first that should do so, since Israel has nuclear, chemical, biological and other types of weapons of mass destruction. No country should possess weapons of mass destruction. That would protect the region and the world from devastating and expensive wars in future.

Interviewer: Syria will hand over its chemical weapons to international control; however we all know that Russian experts confirmed the use of poisonous chemical substances in Aleppo suburbs by an extremist terrorist group, what is your take on this? What do you suggest to protect Syrians and neighbouring countries from these groups that may launch chemical attacks?

President al-Assad: The incident you cited was in March 2013 when the terrorists launched missiles carrying poisonous chemical materials on civilians in Khan al-Asal near Aleppo and tens were killed. Subsequently, we requested the UN to send a commission of experts to confirm and document what occurred in order to subsequently determine the identity of those responsible for the attack. As it was obvious that the terrorists were responsible, the US hindered the deployment of the commission to Syria.

Therefore, alongside the Russian experts, we submitted all the details and indications to Russia. The evidence confirmed that the attack was perpetrated by the terrorists in Northern Syria. The delegation of experts on chemical weapons – who were in Syria a week ago – are yet to return to implement the agreement we signed with them during their last visit, which stipulates inspecting a number of areas of which was Khan al-Asal was amongst the top. This must be carefully investigated to determine the nature of the materials used, who used them and most importantly which countries provided these poisonous materials to the terrorists and subsequently to hold them accountable.

Interviewer: Mr President, is it possible to confiscate these poisonous materials from the terrorists? Is this feasible?

President al-Assad: This ultimately depends on which countries are connected to the terrorists. All countries claim that they do not cooperate with terrorists, yet we know for certain that the West provides them with logistical support, claiming that it is a non-lethal military support or humanitarian aid.

However, the reality is that the West and particular countries in the region, including Turkey and Saudi Arabia, maintain direct contact with the terrorists and supply them with all measure of arms. We believe that one of these countries has supplied the terrorists with chemical weapons. One would assume that these states can cease supplying the terrorists with such weapons; nevertheless there are terrorists who would never comply. When they have arms and the opportunity to inflict havoc, they would never submit, even to those who provided them with weapons and money.

Interviewer: Mr President, certain American media outlets reported that officers in the Syrian Arab Army on several occasions asked for your permission to use chemical weapons in fighting the armed opposition, you did not approve, however they used these poisonous weapons independently. Is this credible?

President al-Assad: This is a part of American propaganda which spares no effort to justify aggression.

This reminds us of the actions of Collin Powell under George W Bush’s administration ten years ago, when he presented what was claimed as evidence of Saddam Hussein’s possession of WMD’s which was later proven to be false. They are now repeating similar lies; what you quoted amounts to that. The reality is that, firstly, approving the use of chemical weapons was never discussed in Syria by any party. Secondly, the use of such weapons in different countries remains centralised and not at the disposal of the troops. No infantry or armoured divisions would have such armaments. These armaments are used by specialised units. Therefore these lies are neither logical nor credible.

Interviewer: Mr President, very recently, the Congress was presented with what was pronounced as credible and indisputable evidence. There was video proof to prove the American narrative that chemical weapons were used in Eastern Ghouta by the Syrian Army. What is your opinion on this?

President al-Assad: They failed to produce any evidence, not to Congress or the media; hence they did not present any proof to their own people or even to Russia with whom they are currently holding talks or any other country for that matter. It is just mere talk and an extension of American propaganda. Logically it is not conceivable to use WMD’s only hundreds of metres away from your own troops. Those weapons cannot be deployed in residential areas since they would kill tens of thousands; nor when you are making major advances using conventional weapons. The rhetoric used was unconvincing which placed this American administration in a difficult position domestically. They were less skilful than Bush’s administration that could convince part of the world of their lies. This administration could not even persuade its own allies of its lies. Therefore these allegations bear no value; they are unrealistic and un-credible.

Interviewer: Mr President, the last question which I cannot spare since it concerns wider general safety and security. There are Russian specialists and media outlets who reported that terrorists may prepare for chemical attacks against Israel from government controlled areas. As commander in chief do you confirm this information?

President al-Assad: Firstly, since it is certain that chemical materials are owned by terrorist groups and were used against our soldiers and civilians; this denotes that these materials are readily available. Secondly, we comprehend that these terrorist groups, or those who mobilise them, were seeking to provoke an American strike and, prior to that, they had attempted to involve Israel in the Syrian crisis. For the same reason, your proposition is not unlikely; a regional war would create more chaos which would enable these terrorist groups to inflict more destruction and sabotage. This is a genuine challenge since the terrorists do possess these chemical materials and certain countries are supplying them.

on our blog at  https://syrianfreepress.wordpress.com/2013/09/13/president-al-assads-speech-to-rossiya-24-tv-channel-full-text-in-engfraesp-video-arabic/