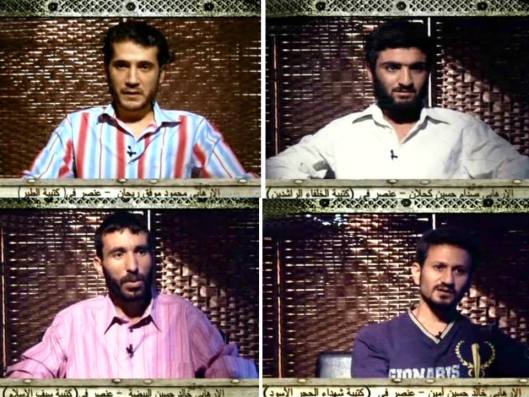 Damascus, (SANA-H.Sabbagh / Ghossoun) – A number of terrorists confessed to taking part in committing brutal crimes against citizen and army personnel including abduction and murder, vandalizing public establishments, and receiving funds and weapons from countries in the region.

In confessions broadcast by the Syrian TV on Friday, terrorist Walid Abdelrahman al-Sheikh said that a man he was doing military service with and a member of terrorist group talked him into going AWOL, and he did so and joined the group, leaving the base where he was serving in Sweida and joining up with the terrorists who gave him a monthly salay of SYP 12,000 and gave him an automatic rifle, three full magazines, and 200 bullets.

Al-Sheikh said he and the members of the terrorist group attacked army checkpoints in Daraa countryside, including two in Khirbet Ghazaleh where they slaughtered all 35 soliders in it and stole their weapons which they turned over to Jabhat al-Nusra.

He also confessed to taking part in eight acts of abduction, including two in which the abductees were delivered to a man called Mohammad al-Zoubi in the town of al-Msaifra, where al-Zoubi issued a fatwa to kill the two after they refused to join the terrorists, so al-Sheikh slit their throats while they were tied up.

Al-Sheikh said two of his cohorts slit the throats of the other six abductees, and that they were rewarded with SYP 1,500 for everyone whose throat they slit and 2,000 for each attack on an army checkpoint.

In turn, terrorist Khaled Hussein Amin, a member of a group affiliated with Jabhat al-Nusra, said he was recruited with a promise of being paid SYP 12,500 a month and 2,000 for each attack on a checkpoint.

After being given an automatic rifle, Amin took part in several attacks on checkpoints in Damascus Countryside and sniped 15 Syrian Army personnel.

Amin also confessed to taking part in dozens of robberies and thefts of stores and warehouses, adding that they also received funds and weapons from Qatar and that they were joined by gunmen from Afghanistan, Iraq, Libya, Palestine and other countries.

Similarly, terrorist Khaled Hussein al-Beda from another group affiliated with Jabhat al-Nusra, said that his group’s leader asked him to join the army to get a rifle and then run away with it, so he enlisted but ran away without stealing a rifle and joined a terrorist group.

Al-Beda said the first operation he took part in was the detonation of a car bomb in Khan al-Sheih area, with him helping in rigging the car with around 500 kilograms of explosives, and later he and his group detonated a second car bomb in the same area and took part in several attacks on checkpoints there, admitting that he alone killed around 20 soldiers.

He said that the leader of his group asked him to bring one of his three wives to serve as a “wife” for the other terrorists, so he brought his wife Fatima Ahmad Faroukh to the group.

Al-Beda said that they received explosive, weapons and funds from Jordan.

Meanwhile, terrorist Saddam Hussein Kahlan said that he was recruited by the leader of a terrorist group who knew his uncle who was harboring him and recruiting for his group, and that his uncle talked him into joining with the promise of receiving SYP 12,000 per month.

He confessed to participating in the operations carried out in the Eastern Ghouta alongside other terrorists from Libya, Afghanistan, Pakistan and Jordan.

Terrorist Kahlan added that they were receiving money from Turkey via the terrorist groups’ leaders who were distributing it.

Terrorist Mahmoud Mowafak Raihan, who is affiliated to al-Tair battalion, said that he, alongside 500 gunmen, participated in the attack on the vehicle management department in Harasta, adding that they killed 11 military personnel and kidnapped 9 others from the Technical Institute.

He also confessed to preparing two booby-trapped cars which later were detonated in Jarmana and al-Qazzaz, claiming dozens of lives and wounding others.