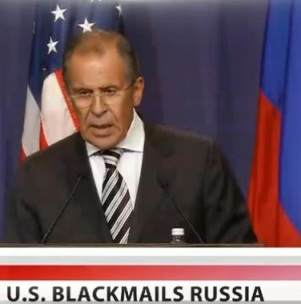 The US is pushing Russia into approving a UN resolution that would allow for military intervention in Syria, in exchange for American support of Syria’s accession to OPCW, Russian Foreign Minister Sergey Lavrov has said.

“Our American partners are starting to blackmail us: ‘If Russia does not support a resolution under Chapter 7, then we will withdraw our support for Syria’s entry into the Organization for the Prohibition of Chemical Weapons (OPCW). This is a complete departure from what I agreed with Secretary of State John Kerry’,” Russian Foreign Minister Sergey Lavrov told Channel 1’s Sunday Time program.

Chapter 7 of the UN charter would allow for potential military intervention in Syria.

The head of Russia’s Foreign Ministry went on to say he was surprised by the West’s “negligent” approach to the conflict.

“Our partners are blinded by an ideological mission for regime change,” said Lavrov. “They cannot admit they have made another mistake.”

Slamming the West’s intervention in Libya and Iraq, the foreign minister stated that military intervention could only lead to a catastrophe in the region. Moreover, he stressed that if the West really was interested in a peaceful solution to the conflict that has raged for over two years, they would now be pushing for Syria’s entry into the OPCW in the first place, not for the ouster of President Bashar Assad.

“I am convinced that the West is doing this to demonstrate that they call the shots in the Middle East. This is a totally politicized approach,” said Lavrov.

The Russian foreign minister pointed out that in the case of a military scenario, militants would come to power and Syria would no longer be a secular state. Up to three quarters “of these guys are Jihadists,” including the most radical groups such as Al-Nusra Front and the Islamic State of Iraq and Levant, who want to create an Islamic Caliphate in Syria and in neighboring territories, Lavrov said.

“If our western partners think at least two steps ahead, they cannot but understand it,” Lavrov noted.

As to why the West would want that, Moscow has so far received no clear answer, but hears “mantras” on the necessity to promote democracy and protect human rights, said the minister. That is important, but “responsible politicians should be guided not only by that. Not to care about stability in a key world region is absolutely irresponsible,” he added.

According to Lavrov, some experts alleged that “someone is attempting to create a guided chaos” in the region for their own benefits. However, the foreign minister said he personally sees no possible advantages that Western countries would gain if they were behind moves to stir up instability.

“There’s only an attempt to grasp a straw, and turn a blind eye to the fact that the world is changing and becoming multipolar,” Lavrov concluded.

Lavrov harked back to last year’s Geneva accord which was agreed upon by the international community, including Russia and the US. However, when the resolution went to the Security Council the US demanded that Chapter 7 be included.

“History is repeating itself. Once again in Geneva an agreement has been reached which does not contain any mention of Chapter 7. But the Security Council wants to redo the document in their own way to include it.”

He called on the West to observe international law and stop writing resolutions motivated by their “geopolitical ambitions.”

‘Both sides must hand over chemical weapons’

“The solutions currently being worked out at the OPCW suggest that all stocks of Syrian chemical weapons must be brought under control and ultimately destroyed.”

Lavrov further charged that the West was “not telling the whole story” by asserting that chemical weapons are only possessed by the regime, and not the opposition.

He added that the available information provided by the Israelis confirmed that on at least two occasions, the rebels had seized areas in which chemical weapons were stored and those arms might have fallen into their hands.

“According to our estimates, there is a strong probability that in addition to home-grown labs in which militants are trying to cook up harmful and deadly concoctions, the data provided by the Israelis is true,” the Russian FM said.

“Preparatory work for OPCW inspectors to assume control of chemical weapons storage sites requires that those who fund and sponsor opposition groups –  including extremists –  demand that they hand over the [arms] which have been seized so that they can be destroyed, pursuant to the Convention on the Prohibition of Chemical Weapons.”

Lavrov added that Russia was not a guarantor for the disarmament of Syria’s chemical weapons, as Syria’s commitments fell under the auspices of the Chemical Weapons Convention, which is internationally administered by the OPCW.

Lavrov said Russia and the US were working out a draft resolution to be submitted to the OPCW, although several points were yet to be agreed upon.

Earlier in September, Moscow said it would submit data to the UNSC proving that the chemical weapons in a Damascus suburb were used by the rebels.  These “purely technical” documents were handed over to Russia by the Bashar Assad government and are being examined by Russian specialists. This data “is an addition to what we already know and to what is known to…independent experts who give their assessments and confirm that the opposition regularly resort to provocations, attempting to accuse the regime of using chemical weapons” and this way get foreign military support, Lavrov said.

A UN experts team, who investigated the August 21 attack in Syria, presented a report on their findings, in which they described the ammunition and substances they discovered on the scene, but made no conclusions regarding who was behind the incident.

However, the US, along with Britain and France, moved quickly to repeat their accusations against the Syrian government.  “Such an approach is neither scientific, nor professional but rather politicized and ideology-driven,” the Russian foreign minister stressed.

According to Lavrov, it was no secret that they did not need any report. Long before the document was prepared, they stated that they already knew everything from their intelligence findings – which have never been presented to the public in full, the Russian minister noted.

“What they did show to us does not convince that the [Syrian] regime is linked to the episode with the use of chemical weapons,” Lavrov said.

He reiterated that there is also evidence by eyewitnesses, including nuns from the Christian monastery close to the scene of the deadly attack, and journalists who visited the area. Reporters, Lavrov said, talked to militants who told them that they “received from abroad munitions that they had never seen before and did not know how to use them, but they used them in the end.” There was also an open letter by the Pentagon and CIA veterans to President Obama, where they say that the rebels could have used chemical weapons.

Moscow expects the UN experts to go back to Syria to finish their investigation there, which should include three other incidents – on August 22, 24 and 25 – when the Syrian army was attacked with poisonous gas, Lavrov said.

Sergey Lavrov said that the time frame for the elimination of Syria’s chemical weapons was not unrealistic.

“The overwhelming majority of the figures as per timing, term, beginning, finishing of the mission have been suggested by the American side,” he added.

Even if the time frame is feasible, there remains disagreement on the cost of the venture.

Earlier this week, President Assad said the destruction of Syria’s chemical weapons arsenal would be a costly venture.

“It needs a lot of money, it needs about one billion [US dollars]. It’s very detrimental to the environment. If the American administration is ready to pay the money, and to take responsibility of bringing toxic materials to the United States, why don’t they do it?” Assad told Fox News

Lavrov said he had heard of the cost estimate, although during his negotiations with his US counterpart in Geneva last week, the figure was much lower. Lavrov said the discrepancy stemmed from the fact that a professional estimate was in order.

“When OPCW experts visit Syria and view the storage sites for chemical weapons, they will understand what can be destroyed on the spot (and this is also possible) with the use of mobile equipment which a number of states have, and those where special factories need to be built, as we did when destroying Soviet chemical weapons stockpiles. But for those which need to be taken out of the country – toxic substances – will require a special decision, because the convention considers it essential that the destruction takes place on the territory of that country which possesses the chemical weapons,” he said.

Lavrov said legal grounds would need to be found to move forward in this case, but if all sides could agree in principle, then drawing up a legally binding document will not be hard.

He further noted the difficulties that would be faced in assuring the security of both the Syrian and international experts tasked with bringing the chemical weapons under control and laying the groundwork for their ultimate destruction.

“We’ve considered that an international presence will be demanded in those areas where experts are working. We are prepared to allocate our own servicemen or military police to take part in those efforts. I do not believe it is necessary to send in a strong [military] contingency.] It seems to me that it will be sufficient to send in military observers. It will be necessary to do it in such a way that the observers will come from all permanent members of the UN Security Council, Arab states and Turkey, so that all conflicting sides in Syria understand that this contingent represents all external forces who are collaborating with one or the other conflicting sides in Syria…so that they don’t resort to provocations,” he said.

Lavrov reiterated previous statements made during his negotiations with Secretary of State John Kerry following their talks in Geneva last week that the opposition was equally responsible for providing for the safety of OPCW and UN experts in the country and not allowing for any “provocations.”