“In politics, nothing happens by accident. If it happens, you can bet it was planned that way”
– Franklin D. Roosevelt –

U.S. military police were targeted and killed by Obama in the Washington DC Navy Yard shooting.  Why?

Agents from the U.S. military’s criminal investigation units had uncovered a plot to detonate a nuclear device in the heart of the nation’s capitol as part of an Obama government false flag.

Officials from NCIS (United States Naval Criminal Investigative Service) and the U.S. Office of the Provost (both with field offices inside the Washington DC Navy Yard) had threatened to arrest Obama for planning to attacked Syria without Congressional approval following a planned nuclear detonation false flag in Washington DC.

The Office of the Provost is on the second floor of Building 34, One First Avenue, Charlestown Navy Yard and NCIS is located at 716 SICARD STREET SE, SUITE 2000, WASHINGTON NAVY YARD, DC

It investigates activities concerning crimes against or by United States Navy and United States Marine Corps personnel, along with national security, counter-intelligence, and counter-terrorism cases.

A false flag is the crime of treason – levying war against the United States.

Prior to the Washington DC Navy Yard shooting the Joint Chief of Staff and Provost Marshals were planning and preparing to arrest Obama for treason. For levying war against the United States with a planned false flag in Washington DC on the anniversary of 9/11 – a nuclear detonation.

In the United States the Office of the Provost has the authority to arrest the President if he or she violates the terms of his/her employment, or commits an act that is detrimental to the United States. He/she can be held liable, arrested, imprisoned etc., depending on the depth of the violation, by the Provost Marshal.

If it has been determined that the president of the United States has committed treason in a manner unmistakable to all, the Chairman of the Joint Chiefs of Staff convenes a covert meeting (in this case the Washington DC Navy Yard) to get a vote of the Joint Chiefs of Staff. The Provost Marshall General of the Army and/or Marines will usually be in attendance. Remember that a military officer takes an oath of office to do one thing and one thing only – “……. to support and defend the Constitution of the United States against ALL enemies, foreign OR DOMESTIC.” They must determine above a reasonable doubt that the enemy domestic is the treasonous president before they can attempt to arrest him or her.

Once the Joint Chiefs of Staff have determined beyond a reasonable doubt that the president has committed treason a convoy of 10 to 12 HIGH ranking officers (13 killed at the Navy Yard) depart the Pentagon, accompanied by a large contingency of Military Police (Provost Marshals, NCIS agents) and all necessary armament and provisions to enter the grounds of the White House, by FORCE if necessary, and proceed to the location of the president and put him under arrest. Then, The Chairman of the Joint Chiefs of Staff would advise the Speaker of The House, The President of the Senate, The Attorney General and the Secretary of State of their actions. Obama’s response to the threat of arrest was a coordinated assault against NCIS agents who uncovered the false flag plot against the United States and Provost Marshals who threatened to arrest Obama at the Washington DC Navy Yard.

Have you wondered why not all of the names and the rank of those who were killed in the assault have been released? The White House (Obama) ordered their names and rank classified as it would raise alarm bells in Washington DC should the public know Joint Chiefs of Staff members, Provost Marshals and NCIS agents were targeted and killed for threatening to arrest Obama for treason. The White House is claiming that the names of those killed are being withheld pending next of kin notification.

On September 28, 2009 the History Channel released a movie titled “Day After Disaster“. The entire movie is about Washington DC being the target and victim of a nuclear detonation. The movie also features Obama talking about nuclear detonations in the U.S. Movie 0.50 time stamp – “One terrorist, one nuclear weapon could unleash massive destruction” ~ Obama says. Last year PRESS Core wrote an article titled “COG planning for and preparing Washington DC nuclear detonation false flag event.” after receiving information that September 30, 2012 was the day “Day after Disaster” was to executed in real-time. Obama’s planned false flag attack for September 30, 2012 was averted after the public was made aware of the false flag beginning August 18th, 2012.

Obama’s 9/11 anniversary false flag was thwarted when the Joint Chief of Staff and the Provost Marshals from the Washington DC Navy Yard confronted Obama and threatened to arrest him for treason for planning to detonate one or more nukes in the nation’s capitol – Washington DC.

According to this report, this unprecedented request was made directly to Minister Vladimir Puchkov by US Department of Homeland Security (DHS) Director Janet Napolitano (now retired) who said these Russian troops would work “directly and jointly” with her Federal Emergency Management Agency (FEMA), part of whose mission is to secure the continuity of the US government in the event of natural disasters or war.

This report has been verified. The origins of this report can be read on the website of Ministry of the Russian Federation for Affairs for Civil Defence, Emergencies and Elimination of Consequences of Natural Disasters – or internationally as EMERCOM of Russia – “The Russian Emergency Situations Ministry and the USA Federal Emergency Management Agency (FEMA) are going to exchange experts during joint rescue operations in major disasters.

“In addition, the parties approved of U.S. Russian cooperation in this field in 2013-2014, which envisages exchange of experience including in monitoring and forecasting emergency situations, training of rescuers, development of mine-rescuing and provision of security at mass events.“ 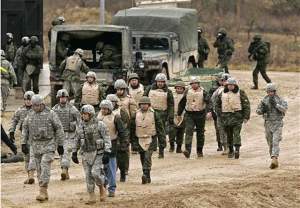 Former Department of Homeland Security Secretary Janet Napolitano ABC News Aug 27, 2013: “A massive and “serious” cyber attack on the U.S. homeland is coming, and a natural disaster — the likes of which the nation has never seen — is also likely on its way.“

The only way anyone could know that there is “a natural disaster — the likes of which the nation has never seen — is also likely on its way” is if you are the one planning and preparing it.

“You also will have to prepare for the increasing likelihood of more weather-related events of a more severe nature as a result of climate change, and continue to build the capacity to respond to potential disasters in far-flung regions of the country occurring at the same time.

“You will need a large bottle of Advil,” Napolitano joked.

Napolitano is hinting at what the United States government (Obama) is planning and preparing for using its weather modifying weapon of mass destruction called HAARP.

Janet Napolitano’s resignation as Department of Homeland Security Secretary was effective … September 7, 2013 – just 4 days before the planned 9/11 anniversary nuclear device detonation false flag. Just before leaving her post Dyess Air Force base reportedly moved nuclear warheads to the East Coast of the United States in a secret transfer that had no paper trail. The Dyess Air Force Commander allegedly authorized unknown parties to transfer nuclear warheads to an unknown location on the U.S. East Coast, where the warheads would then be picked up and potentially utilized. Conspiracy?

Legal definition for conspiracy – An agreement between two or more persons to engage jointly in an unlawful or criminal act, or an act that is innocent in itself but becomes unlawful when done by the combination of actors.

Voters on a recent poll

RE: TREASON… “Do you support charging Barack Hussein Obama with treason for preparing the U.S. military to levy war against Syria and for giving aid and comfort to terrorists in Syria?

RE: US SYRIAN WAR… “Do you authorize Obama to use military force against Syria?