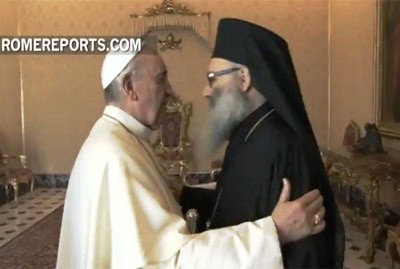 Beirut – (SANA-M. Ismael) – The Greek Orthodox Patriarch of Antioch and all East, John X Yazigi, met Pope Francis on Saturday in the Vatican.

“The visit was an opportunity that Patriarch Yazigi seized to thank the Pope’s efforts for establishing peace and dialogue as to replace the discourse of war in the Levant as a whole and Syria in particular,” the press office of Greek Orthodox Patriarch of Antioch and all East said in a statement.

Patriarch Yazigi and Pope Francis discussed the issue of the kidnapped people in Syria, particularly the two bishops who were abducted in Aleppo, calling for releasing them.

The two sides also discussed the situation of the Christians in Lebanon, Syria and the Levant.