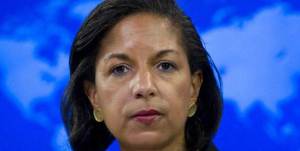 The US National Security Adviser says the White House has been and is seeking to oust Syrian President Bashar al-Assad from power.

“The position of the United States has been and remains very clear, and that is that Assad must go,” Susan Rice said in an interview with CNN’s Fareed Zakaria GPS about the ongoing chemical weapons negotiations with Syria.

“He has inflicted horrific violence on his country that’s spilled over into the region. So our strong view is that there isn’t a viable future for Syria that is governed by Assad,” she added.

She made the remarks in response to a question that how Washington can be partner with President Assad to destroy the country’s chemical weapons and at the same time, be trying to get rid of him.

Rice added that the latest UN resolution which is aimed at destroying Syria’s chemical weapons is not limited to President Assad’s government.

“Now, the resolution and the agreement doesn’t speak about Assad as an individual, it speaks about the requirements and the obligations of the Syrian government. And that’s an important distinction, that whatever Syrian government is there, near-term or in the future, will have the same obligation to implement these commitments and this resolution faithfully. So this is not specific to Assad.”

Rice, who is a former US Ambassador to the UN, also highlighted that the Obama administration has not taken any options off the table and is ready to unilaterally strike Syria if Damascus fails to comply with the resolution.

“The president has been very clear that we remain postured to act if – if the choice is – is taken by him and if the necessity arises. We’re not taking any options off the table. And the president has been very clear that as commander-in-chief he has the authority to act in the interests of the United States and to use force if necessary,” she said.

This as the resolution does not threaten automatic punitive action against the Arab state if Damascus does not meet its terms.

In a recent NATO DATA report released this year, they asserted that 70 percent of Syrians support the Assad regime. Another 20 percent were deemed neutral and the remaining 10 percent expressed support for the rebels.

In case Susan Rice FORGOT TO LISTEN TO THE VOICE OF THE SYRIANS, I’ll be happy to remind her. This way, she can remember her place, and not try to speak about “who stays and who goes” in a country she has nothing to do with.

Syrians rally in support of Assad, his reform program…

People of Aleppo Take to the Streets: We Want FSA OUT!!! We Want Syrian Army (English Subtitles)

Good thing this wasnt a QUIZ for you Susan Rice, you would have failed miserably! Syria’s future is NOT in YOUR HANDS, you have enough on them staining them already! Stop trying to convince anyone of your lies and what YOU want for Syria. Syria is NOT for sale, and who governs Syria is NOT a concern from an American appointed to her position! In case you missed it, the world has spoken. Mind your own business!

You have NO credibility, and NO support. Take your opinion elsewhere!

6 thoughts on ““Susan Rice, Can You Please Shut Up? If Syrians Want ‘YOUR Opinion’ We’ll Ask For it!””