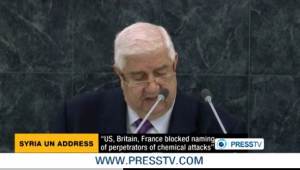 Syria Foreign Minister Walid al-Muallem says the US, Britain and France have blocked the naming of the real perpetrators of chemical weapons attacks in the Arab country.

In his address to the 68th UN General Assembly on Monday, Muallem also warned that “terrorists” fighting against President Bashar al-Assad government are being supplied with chemical weapons.

The minister also stated that the al-Qaeda-linked militants eat human hearts and dismember people while they are still alive, then send their limbs to family members.

Washington had threatened to take military action against Syria over an unsubstantiated claim that the Syrian government had been behind a deadly chemical attack near Damascus on August 21.

Syria strongly rejected the allegation, saying the attack had been carried out by the foreign-backed militants to draw in military intervention.

On September 14, Russia and the United States agreed on a deal under which Syria must account for its chemical weapons stockpiles within a week and see them eliminated by the middle of 2014. Syria has agreed to the deal.

The UN Security Council on September 27 unanimously approved a resolution to avert a US-led military strike against Syria. The resolution condemned the use of chemical weapons in the country and called for their elimination.

Syria has been gripped by deadly turmoil since 2011.

Reports indicate that Western powers and their regional allies — especially Qatar, Saudi Arabia, and Turkey — are supporting the militants operating inside the country.