The Israeli military has hit a target in Syria after a soldier in the Israeli-occupied Golan Heights sustained slight injuries by fire from the Syrian side.

On Wednesday, Tel-Aviv said two mortar shells were fired at an Israeli military post, adding, an Israeli soldier was slightly injured by shrapnel and another suffered from shock.

There have been no reports on whether the shells were fired by Syrian forces or militants fighting against the Syrian government.

On September 12, two mortar shells fired from inside Syria struck an area in the south of the Golan Heights.

“They were apparently fired in error,” the spokesman added. 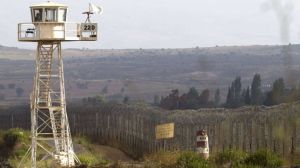 The Golan Heights has been hit by mortar shells several times since the beginning of the conflict in Syria more than two years ago.

Reports say the Western powers and their regional allies — especially Qatar, Saudi Arabia, and Turkey — are supporting the militants operating inside Syria.

According to the United Nations, more than 100,000 people have been killed and millions of others displaced in the violence.

The Israeli regime occupied Golan during the 1967 Six Day War.

Israel occupied the Syrian territory in 1967 and later annexed it in 1982. The international community has never recognized the annexation.