Israeli Deputy Foreign Minister Danny Ayalon has participated in a propaganda film to promote the Jewish relationship with the city of Jerusalem. The film shows the gradual wearing away of the Dome of the Rock and the appearance of the alleged Temple of Solomon in place of the dome. The Israeli Foreign Ministry had banned the release of an earlier version of the film, in which the Dome of the Rock was more clearly demolished and the temple was put in its place.

Palestinian organisations and individuals have condemned both films, charging that they are promoting, perhaps even inciting, Israelis to demolish the holy Al-Aqsa Mosque and to build the Temple in its place, a propaganda campaign now pushed by the Israeli Foreign Ministry. 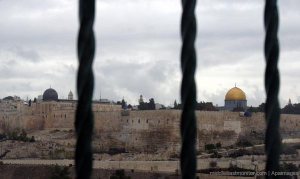 The Al-Aqsa Association for Waqf and Heritage said that officially supported organisations and groups, as well as branches of the Israeli occupation, are all working hard to promote the idea of demolishing the Al-Aqsa Mosque and building the Temple in its place. The association warned against the danger of such ideas, “which are picking up pace on a daily basis”.

Moreover, in a statement the association warned that the “plans to bomb the Al-Aqsa Mosque are on the verge of execution.”

The association quoted Yedioth Ahronoth newspaper saying that the Israeli Foreign Ministry had earlier prepared “a short promotional video that makes historical Jewish claims regarding occupied Jerusalem and the Al-Aqsa Mosque” that included “scenes of the Dome of the Rock, followed by a scene in which the dome is demolished, and then a scene showing the construction of the alleged Temple on its ruins.”

According to the newspaper, the film was censored “in case of angry Muslim and Arab reactions and some scenes were changed.”

In the video, Danny Ayalon talks about what he calls “the Temple generation”, referring to the alleged Temple as “the spiritual centre in Jerusalem, which is considered to be a holy city… it is easy to identify by the gilded Dome of the Rock”. He also claims that the Dome of the Rock was built in place of the Temple, which he says was first built 3,000 years ago.

The official spokesperson for the Islamic Movement in Palestine, Zahi Njedat, responded to the film by calling on the Islamic and Arab nations to “step up to the occasion, as the danger has approached and time is precious.”

On his part, the former Palestinian Mufti and head of the Supreme Islamic Council in Jerusalem, Sheikh Ekrima Sabri, pointed out that the Israeli propaganda is proof of its bad intentions regarding the Al-Aqsa Mosque, and proof that extremist Jewish groups are now dominating the Israeli public and taking advantage of the Arab world’s internal conflicts to destroy the Al-Aqsa Mosque as soon as possible.

Moreover, Sabri called on Jerusalemites and all Palestinians to be careful and vigilant and to remain present inside the mosque as a field solution, “because surprises may occur any day now”. He also expressed his disappointment in the situation of the Arab and Islamic nations, which should be taking responsibility for what is happening in Jerusalem.

In regards to the continuous raids on the Al-Aqsa Mosque, the association said that MK Moshe Feiglin from the Likud Beiteinu coalition stormed the Al-Aqsa Mosque on Wednesday and was accompanied by about 30 settlers, only one day after a raid by around 100 female soldiers in uniform, who according to worshippers raided the mosque from the Mughrabi Gate and were divided into groups to listen to guides speaking about the alleged Temple.

In addition to the soldiers, settlers and politician, 30 settlers accompanied by a rabbi also raided the mosque last Monday.

The association warned against the occupation’s increasing actions “against the Al-Aqsa Mosque, through which the occupation is trying to impose a new fait accompli in Al-Aqsa”. They called on the Islamic nations to “take initiative and assume responsibility towards the first Qiblah in order to defend and preserve the sanctity of Al-Aqsa.”

The association also pointed out that the settlers and Jewish groups raiding the Al-Aqsa focus as well on the Museum of Islamic Art Chapel and the Eastern Wall, especially near the Al-Rahma Gate. It noted the previous warning by the former head of the Islamic Movement in Palestine, Sheikh Raed Salah, against plans to turn the Museum of Islamic Art Chapel into a Jewish synagogue.