More than two and a half years on, Israel’s purported neutrality in the Syrian conflict and the United State’s fanfare rhetoric urging a “regime change” in Damascus were abruptly cut short to unveil that the Israeli factor has been all throughout the conflict the main concern of both countries. 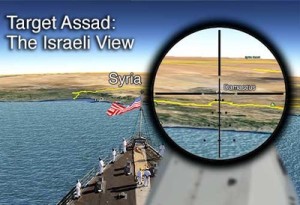 All their media and political focus on “democracy versus dictatorship” and on the intervention of the international community on the basis of a “responsibility to protect” to avert the exacerbating “humanitarian crisis” in Syria was merely a focus intended to divert the attention of world public opinion away from their real goal, i.e. to safeguard the security of Israel.

Their “Plan A” was to force a change in the Syrian regime as their “big prize” and replace it by another less threatening and more willing to strike a “peace deal” with Israel and, in case of failure, which is the case as developed now, their “Plan B” was to pursue a “lesser prize” by disarming Syria of its chemical weapons to deprive it of its strategic defensive deterrence against Israel’s overwhelming arsenal of nuclear, chemical and biological weapons of mass destruction. Their “Plan A” proved a failure, but their “Plan B” was a success.

However, the fact that the Syrian humanitarian crisis continues unabated with the raging non-stop fighting, while the United States is gradually coming to terms with Syria’s major allies in Russia and Iran, as a prelude to recognizing the “legitimacy” of the status quo in Syria, is a fact that shutters whatever remains of U.S. credibility in the conflict.

President Barak Obama addressing the UN General Assembly on September 24, had this justification: “Let us remember that this is not a zero-sum endeavor. We are no longer in a Cold War. There’s no Great Game to be won, nor does America have any interest in Syria beyond the well-being of its people, the stability of its neighbors, the elimination of chemical weapons, and ensuring it does not become a safe-haven for terrorists. I welcome the influence of all nations that can help bring about a peaceful resolution.”

This U-turn shift by the U.S. dispels any remaining doubts that the U.S. ever cared about the Syrian people and what Obama called their “well-being.”

The U.S. pronounced commitment to a “political solution” through co-sponsoring with Russia the convening of a “Geneva—2” conference is compromised by its purported inability to unite even the “opposition” that was created and sponsored by the U.S. itself and the “friends of Syria” it leads and to rein in the continued fueling of the armed conflict with arms, money and logistics by its regional Turkish and Gulf Arabs allies, which undermines any political solution and render the very convening of a “Geneva—2” conference a guess of anybody.

Meanwhile, Israel’s neutrality was shuttered by none other than its President Shimon Peres.

Speaking at the 40th commemoration of some three thousand Israeli soldiers who were killed in the 1973 war with Syria and Egypt, Peres revealed, unarguably, that his state has been the major beneficiary of the Syrian conflict.

Peres said, “Today” the Syrian President Basher al-Assad “is punished for his refusal to compromise” with Israel and “the Syrian people pay for it.”

When it became starkly clear by the latest developments that there will be no “regime change” in Syria nor there will be a post-Assad “Day After” and that the U.S., major guarantor of Israel’s survival, has made, or is about to make, a “U-turn” in its policy vis-à-vis the Syrian conflict to exclude the military solution as “unacceptable,” in the words of Secretary of State John Kerry on October 6, Israel got impatient and could not hide anymore the Israeli factor in the conflict.

On September 17, major news wires headlined their reports, “In public shift, Israel calls for Assad’s fall,” citing a report published by the Israeli daily, the Jerusalem Post, which quoted Israel’s ambassador to the United States, Michael Oren, as saying, “We always wanted Bashar Assad to go, we always preferred the bad guys who weren’t backed by Iran to the bad guys who were backed by Iran.”

“The greatest danger to Israel is by the strategic arc that extends from Tehran, to Damascus to Beirut. And we saw the Assad regime as the keystone in that arc,” Oren added.

And that’s really the crux of the Syrian conflict: Dismantling this “arc” has been all throughout the conflict the pronounced strategy of the U.S.-led so-called “Friends of Syria,” who are themselves the friends of Israel.

The goal of this strategy has been all throughout the conflict to change the regime of what Oren called the Syrian “keystone in that arc,” which is supported by a pro-Iran government in Iraq as well as by the Palestinian liberation movements resisting the more than sixty decades of Israeli military occupation, or otherwise to deplete Syria’s resources, infrastructure and power until it has no choice other than the option of yielding unconditionally to the Israeli terms and conditions of what Peres called a “compromise” with Israel as a precondition for the return of the Israeli-occupied Syrian Golan Heights.

This strategic goal was smoke-screened by portraying the conflict first as one of a popular uprising turned into an armed rebellion against a dictatorship, then as a sectarian “civil war,” third as a proxy war in an Arab-Iranian and a Sunni-Shiite historical divide, fourth as a battleground of conflicting regional and international geopolitics, but the Israeli factor has been all throughout the core of the conflict.

Otherwise why should the U.S.-led “Friends of Syria & Israel” care about the ruling regime in a country that is not abundant in oil and gas, the “free” flow of which was repeatedly pronounced a “vital” interest of the United States, or one of what Obama in his UN speech called his country’s “core interests;” the security of Israel is another “vital” or “core” interest, which, in his words, “The United States of America is prepared to use all elements of our power, including military force, to secure.”

The end of the Cold War opened a “window of opportunities” to build on the Egyptian-Israel peace treaty, according to a study by the University of Oslo in 1997. A peace agreement was signed between the Palestine Liberation Organization (PLO) and the Hebrew state in 1993, followed by an Israeli-Jordanian peace treaty the year after. During its invasion of Lebanon in 1982, Israel tried unsuccessfully to impose on the country a similar treaty had it not been for the Syrian “influence,” which aborted and prevented any such development ever since.

Syria remains the odd number in the Arab peace-making belt around Israel; no comprehensive peace is possible without Syria; Damascus holds the key even to the survival of the Palestinian, Jordanian and Egyptian peace accords with Israel. Syria will not hand over this key without the withdrawal of the Israeli Occupation Forces (IOF) from Syrian and other Arab lands and a “just” solution of the “Palestinian question.”

This has been a Syrian national strategy long before the Pan-Arab Baath party and the al-Assad dynasty came to power.

Therefore, the U.S. and Israeli “Plan A” will remain on both countries’ agendas, pending more forthcoming geopolitical environment.

Nicola Nasser is a veteran Arab journalist based in Birzeit, West Bank of the Israeli-occupied Palestinian territories.