In a fresh airstrike against the Gaza Strip, an Israeli unmanned aerial vehicle has fired a missile into the north of the coastal enclave, Palestinian sources say. 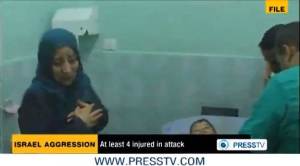 Witnesses said a huge explosion was heard near the training military base, which was empty at the time.

The Israeli airstrike came shortly after two rockets were launched from the Gaza Strip at the southern Israeli port city of Ashkelon. They caused no injuries or damage.

On Sunday, mortar shells were also fired on Eshkol, north of Gaza.

The Israeli military frequently bombs the Gaza Strip, claiming the attacks are being conducted for ‘defensive purposes.’ However, disproportionate force is always used, in violation of international law, and civilians are often killed or injured.

Gaza has been blockaded since 2007, causing a decline in the standard of living, unprecedented levels of unemployment, and unrelenting poverty.