Western powers and their Arab allies agreed with Syrian opposition leaders Tuesday that President Bashar al-Assad should be excluded from any future government, but urged the rebels to take part in a peace conference in Geneva.

British Foreign Secretary William Hague said after a meeting in London that the rebels had to overcome their differences and commit themselves to the talks in the Swiss city that are due to take place in late November.

The president of the Syrian National Coalition, Ahmad Jarba is seen at a press conference after attending the “London 11” meeting, the core group of the so-called “Friends of Syria” in central London on October 22, 2013. (Photo: AFP – Suzanne Plunkett)

But Assad said he was considering to run for re-election in 2014, a move further likely to anger a key rebel group that has so far refused to take part in the Geneva II conference if government officials are present.

Hague told a press conference after the meeting of the so-called “Friends of Syria” that they had agreed to a “number of important steps” during a meeting with Ahmad Jarba, the head of the Syrian National Coalition.

“We are as clear as he is that Assad has no role in a peaceful and democratic Syria,” Hague said.

US Secretary of State John Kerry urged the world to help find a negotiated settlement for Syria, adding that the country itself could disintegrate if more is not done.

“The only alternative to a negotiated settlement is continued if not increased killing,” Kerry told reporters.

The Syrian National Council, a key member of Jarba’s Syrian National Coalition, has already said it opposes the Geneva conference and threatened to quit the umbrella opposition group if Assad’s government takes part.

Hague said that Jarba had to “carry others with him” ahead of a meeting of leading rebel groups in early November, when they will decide whether or not to take part in the Geneva meeting.

He added: “Despite the enormous challenges faced by the Syrian opposition, we urged the National Coalition to commit itself fully to the Geneva II process, and lead and form the heart of any opposition delegation.”

In a communique after the meeting, the “Friends of Syria” agreed that when a transitional government was established “Assad and his close associates with blood on their hands will have no role in Syria.”

Notably absent from London’s meeting is key Syria ally Russia, which has dismissed such gatherings in the past, saying they do not represent all Syrian people.

Powerful armed groups in Syria said attending peace talks or negotiating with Damascus would be an act of betrayal.

The joint declaration by the 19 Islamist groups fighting to topple President Bashar al-Assad cast further doubt on whether the long-delayed peace talks dubbed “Geneva II” will actually go ahead. 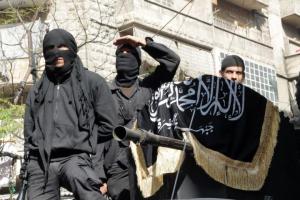 Members of jihadist group Al-Nusra Front take part in a parade calling for the establishment of an Islamic state in Syria, at the Bustan al-Qasr neighborhood of Aleppo, on October 25, 2013. (Photo: AFP – Karam al-Masri)

It also comes as the UN-Arab League peace envoy to Syria, Lakhdar Brahimi, prepares to travel to Damascus on Monday, according to newspaper Al-Watan.

“We announce that the Geneva II conference is not, nor will it ever be our people’s choice or our revolution’s demand,” the groups said in a statement read out by Suqur al-Sham brigade chief Ahmad Eissa al-Sheikh in a video posted online.

“We consider it just another part of the conspiracy to throw our revolution off track and to abort it.”

The 19 rebel groups warned that anyone who went to such talks would be committing “treason, and … would have to answer for it before our courts.”

The statement comes weeks after dozens of major insurgent groups across Syria said the Western-backed opposition umbrella grouping, the National Coalition, had “failed.”

The Geneva talks slated for next month aim to bring rebel and government representatives to the table in a bid to seek a negotiated end to the Syrian conflict, which is estimated to have killed more than 115,000 people since it erupted in March 2011.

The National Coalition is to meet on November 9 to decide whether to take part in the peace talks but has stated emphatically it will only attend if there are guarantees Assad will step down.

Its leader Ahmad Jarba also said this week that no talks can take place unless women and children held in jails are freed.

Assad for his part has said “the factors are not yet in place” for such talks, and he has repeatedly rejected negotiations with any group with ties to the rebels or to foreign states.

Brahimi meanwhile is expected to arrive in Damascus Monday, as part of a regional tour aimed at gathering the support needed for the talks.

He was last in Iran, where he said the participation in Geneva II of Assad’s main regional ally Tehran would be “necessary.”

Russia on Monday described as “outrageous” a threat by powerful rebel groups in Syria against those who attend peace talks on the conflict backed by Moscow and Washington.

“It is outrageous that some of these extremist, terrorist organizations fighting government forces in Syria are starting to make threats,” Foreign Minister Sergei Lavrov said in televised comments.

Russia’s Foreign Minister Sergei Lavrov takes part in a summit of top officials from the ex-Soviet members of the Community of Independent States (CIS) in the Belarus capital Minsk, on October 24, 2013. (Photo: AFP – Viktor Drachev)

“The threats are directed at those who have the courage to attend the proposed Geneva conference being offered by Russia and the United States with the entire world’s support.”

Nineteen Islamist groups fighting to topple Assad issued a statement on Sunday saying the proposed conference “is not, nor will it ever be our people’s choice or our revolution’s demand.”

They went on to say that anyone who attends such talks would be committing “treason” and “would have to answer for it before our courts.”

The Geneva conference was proposed jointly by Lavrov and US Secretary of State John Kerry in May but has since been repeatedly delayed.

United Nations Secretary General Ban Ki-moon is still to name a formal date for the proposed meeting despite comments from some Syrian and Arab nation officials suggesting the talks could be held late next month.

Lavrov said the Islamist commanders’ threats implied that Russian “diplomatic representative offices and diplomats (working) in foreign countries would be legitimate targets” of assassination and other attacks.

“This is all outrageous and unacceptable. And all of this, in the end, rests on the conscience of those who finance and arm these opposition groups,” Russia’s top diplomat said.