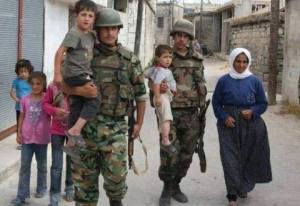 Syria’s army has pushed rebels out of the southern town of Qara, strengthening its hold on a highway linking the capital to government strongholds along the coast, state media said on Tuesday.

The Syrian Arab Army launched an offensive on Friday against the town, which sits on the strategic route 80 km (50 miles) north of Damascus in the Qalamoun mountains.

Damascus is particularly keen to secure the highway as it wants to use it to transport chemical agents as part of a U.S. and Russian-backed program to eliminate its chemical weapons arsenal.

There was no immediate comment from rebels, who use the region around Qara to cross over from Lebanon. But regional news channel Al Mayadeen broadcast images of a reporter walking with Syrian soldiers through Qara’s empty streets.

Reuters says, “The government always refers to rebels as terrorists.”

Well Reuters, when you have foreign mercenaries enter your country, rape women, execute civilians by gunfire, kidnap children, gas innocent people, behead some, eat others etc., they are pretty much referred to as terrorists by any normal persons standards in thinking. Just a “heads up.”