Big concern over destiny of the abducted nuns

Patriarch John X Yazigi of Antioch and all East for Greek Orthodox condemned holding the nuns who were kidnapped by the armed terrorist groups as hostages at St. Thecla Convent in Maloula town in Damascus countryside, stressing that capturing them until now in spite of all ongoing contacts is a flagrant violation of people’s dignity and of the voice of peace in Syria and the whole East.

In a statement, Patriarch Yazigi called on “the Human conscience and all people who have good intentions” to work for releasing the nuns and the orphans held hostages.

Earlier, an armed terrorist group attacked St. Thecla Convent and held Mother Superior Pelagia Sayyaf and a number of nuns as hostages, in addition to committing crimes of killing and sabotage in the town.

The Foreign and Expatriates Ministry sent two identical letters to the UN Secretary-General and the UN Security Council on the terrorist attack on Maloula town and the crimes perpetrated by the terrorists against the churches and civilians.

France worried over the whereabouts of the nuns, but without blaming the mercenary gangs

France announced that it is very worried over forcing the nuns of St. Thecla Convent in Maaloula town to leave it, but without pointing to the responsibility of the armed terrorist groups for the abduction.

“We are very worried over the reports about the adduction of 12 Syrian, Lebanese nuns and forcing them to leave the convent, AFP quoted Roman Nadal, Spokesperson of the French Foreign Ministry as saying, demanding their immediate release.

He appealed for respecting the place of worship and religious institutions in Syria, affirming France solidarity with Syria churches.

Greek Catholic Patriarch Gregorios III Laham of Antioch and All the East stressed the necessity of putting an end to the war in Syria and all enmities.

In an interview with BBC, Patriarch Laham said, “We hope that there will be one voice in Europe and the US and the world to exert pressure on those who are arming the terrorists in preparation for the international conference on Syria in Geneva.”

On the nuns who were kidnapped by the armed terorist groups in Maloula, Patriarch Laham said that the nuns were in the Convent and then they were transported by bus, adding that no one knows where they are and they might be in Yabroud.

The AFP quoted Zenari as saying in a statement that an armed group made the 12 nuns leave by force, expressing his belief that the nuns are in the neighboring Yabroud city.

He added that all possibilities behind the nuns’ leaving the convent are open, but the reasons and the purpose of such a step are still unknown.

” We strongly condemn the terrorist attack against a worship place which takes care of Orphans and the poor,” Bishop Hanna said in a statement.

He held countries which support terrorists in Syria responsible for the abduction.

An armed terrorist group attacked Monday St. Thecla convent and held Mother Superior Pelagia Sayyaf and a number of nuns hostage, in addition to committing acts of murder and sabotage in Maaloula town.

Foreign and Expatriates Ministry sent two identical letters to the Chairman of the UN Security Council and the UN Secretary General on the attacks committed by takfiri terrorist groups on Maaloula that targeted churches and civilians’ houses. 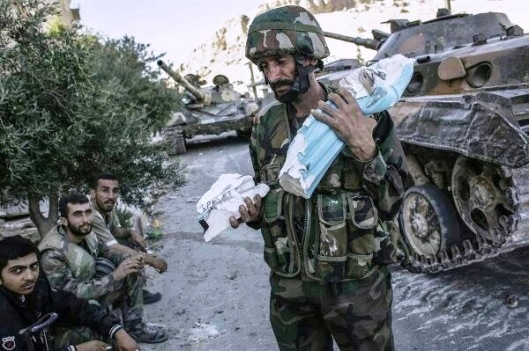 The presence of young ‘Muslim fighters’ from the village among the ‘Jihadists’ mercenaries appalled the Christian population.

“Christians and Muslims had always lived in an atmosphere of mutual trust; the attack on Maaloula has created a lot of distress.”

Islamists have invaded homes and continue to threaten the village, site of ongoing clashes between rebels and the army. The families who fled to Damascus and Beirut tell their story. The goal is to drive out Christians in order to eliminate Christianity.

According to families who fled Maaloula (Syria), some of their Muslim neighbours were involved in the attack that devastated their village located about fifty kilometres from Damascus, dispersing its residents.

Perceived as a betrayal of the long-lasting trust that existed between Christians and Muslims in Maaloula, where Muslims make up about 30 per cent of the village population.

The presence of young Muslim fighters from the village among Syrian ‘rebels’ appalled the Christian population. However, it is a sign of the growing ambiguity of Syria’s armed rebellion.

These facts give that battles that occurred in Maaloula from 3 to 7 September another perspective. Speaking for the first time anonymously, survivors from Maaloula described how elements from the Syrian Liberation Army and the al-Nusra Front coordinated their attack in an attempt to take control of the town.

The explosion of a car driven by a suicide bomber at an army checkpoint at the village entrance was the signal for the attack. Almost immediately, armed rebel groups sprung out from within Maaloula, smashing doors to gain entrance into Christian homes.

With dramatic details, witnesses describe the climate of terror that prevailed, the summary execution on Saturday of three men who, after a failed attempt by the Syrian army to retake Maaloula, refused to recant their faith as well as the kidnapping of six others, whose fate remains unknown to this day.

One of the survivors reports that his house was invaded almost immediately after the car’s explosion at an army checkpoint. Rebels came into the house and moved around as if they were familiar with the place.

After escaping with her husband and their daughter in the rearmost room of their home, she was joined there by attackers who claimed to have smashed the statue of the Virgin Mary at the entrance of the house.

A stifled sob in her throat, she remembers how she wished to die rather than see daughter raped before her own eyes. Fortunately, her fears were not realised.  Nevertheless, she does remember that her husband was forced to recant his Christian faith, the barrel of an assault rifle at his head.

When she remembers how US Secretary of State John Kerry described the SLA forces as “moderate” before a Senate committee, she shakes her head in a sign of weariness over such ignorance or bad faith. In her eyes, the Western press seems to have lost all credibility.

According to some analysts, the attack against Maaloula might have been encouraged by the climate of euphoria that accompanied the prospect of US punitive strikes against Syria.

However, a counter-offensive by the regular army, supported by village youth, followed by a last minute unexplained pullback, proved even more devastating.

The Christian officer who ordered the withdrawal was arrested Maaloula residents say.

The families who fled the village took refuge mainly in Bab Touma, the Christian quarter of Damascus, but some have joined relatives in Lebanon or the convents of the Greek Catholic Church in that country. No Christian refugees are said to be living in tents.

Today, the people of this village, a living icon of Christ’s time since his language, Aramaic, is spoken there, are temporarily dispersed.

A mass was celebrated for them at the headquarters of the Greek Catholic archbishop in Beirut on the feast day of St Thecla (24 September), “equal of the apostles” according to a tradition associated with Maaloula.

Despite the reassuring presence of a Syrian army checkpoint, the village is within firing range of rebels hiding in the surrounding higher ground.

According to eyewitness accounts, burning tires have been rolled down the hill towards some of the houses in the Christian Quarter, and gunmen have fired at fuel tanks near homes in order to set them on fire. These actions are a clear signal to Christians that they are no longer welcome in their own town.

Reeds are now growing in Saints Saris and Bathos Greek Catholic Monastery, a place no one can approach now.

From a distance, one can see that the cross on its the dome is broken and that part of the building bears traces of fire. Nothing is also known about the fate of the 10th century icons it housed.

It has been a time of painful days for Mar Takla (St Thecla) Orthodox Monastery as well. Located between the Maaloula hill held by the rebels and the army-held central square, the complex has 40 nuns and orphans. The Greek Orthodox Patriarchate in Damascus has called on the parties to ease its resupply.

In some church circles, some wonder why Maaloula was seized in the first place given its lack of military significance. They wonder if, in addition to the Christians in this village, Christianity itself was targeted through the Aramaic- speaking community, like the Taliban in Afghanistan when they destroyed the giants Buddhas, believing that by doing so they would eradicate ancient beliefs and superstitions, totally insensitive to religious or even cultural diversity.

There is no doubt, indeed, that the dispersion of Maaloula’s Christian community endangers the priceless cultural legacy that the town, by its very existence, represents.

Where it came from this sectarian racism?
Cleansing Nazareth: Israeli mayor turns racism to social policy

8 thoughts on “Big concern over destiny of the abducted nuns hostages at St. Thecla Convent in Maaloula ~ Young ‘Muslim fighters’ from the village among the takfiri mercenaries”