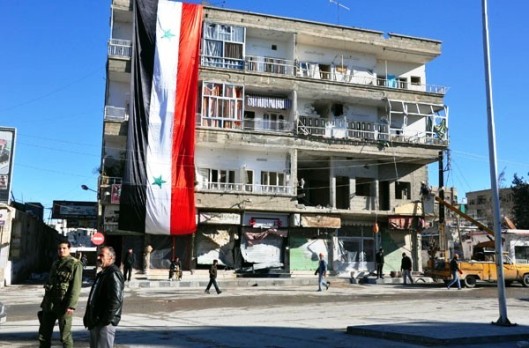 Damascus – M. Ismael/SANA – Assistant Regional Secretary of al-Baath Arab Socialist Party, Hilal al-Hilal said that Syria will be celebrating victory over conspiracy very soon, affirming that terrorists will be eliminated in all areas.

During visits on Sunday to inspect living conditions of the locals in Qara, al-Nabek and Deir Attieh in Damascus countryside , al-Hilal stressed the necessity of meeting the needs of citizens and rehabilitating infrastructures, and listened to accounts by the locals on their suffering at the hands of the armed terrorist groups who had stormed their cities before the Syrian army restored security and stability to them.

Al-Baath official inspected the ongoing operations to clear the rubble that terrorists left behind and efforts to fix damaged electricity, phone and water grids.

Visiting several army checkpoints, al-Hilal said that the sacrifices of the Syrian army will protect Syria and “are held in high regard by all Syrian citizens.”

2 thoughts on “Al-Baath Party official: “We will soon celebrate victory over conspiracy””