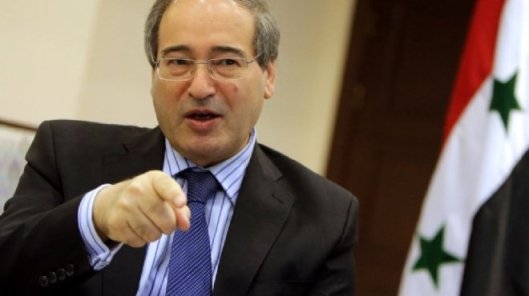 “Al-Qaeda didn’t come from Mars but from Saudi Arabia, from the Wahhabi, extremist way of thinking”

Syria views Saudi Arabia as its number one enemy and accuses it of trying to destroy the country by arming jihadists and other rebels fighting against the Syrian government.

Syrian Deputy Foreign Minister Faisal Muqdad told AFP this week that Saudi Arabia was providing unfettered support for “terrorist groups” in Syria, while other nations had reviewed their positions.

“I think that all those who supported these terrorist groups have the feeling now that they have made big mistakes,” Muqdad said in an interview on Thursday.

“The only party who is declaring the full support to the terrorist groups, to Al-Qaeda, is Saudi Arabia,” he said.

Muqdad urged the world to press Saudi Arabia to halt its support for the rebels, to prevent what he said was “another 11 September incident”.

“I think that if the world wants to avoid another 11 September incident, they must start telling Saudi Arabia ‘enough is enough’,” he said, referring to Al-Qaeda’s 2001 attacks on the US.

Earlier this month, Syrian government urged the United Nations to take a stand against Saudi support for Islamist groups whose influence has grown on the battlefield.

“We call on the UN Security Council to take the necessary measures to put an end to the unprecedented actions of the Saudi regime, which is supporting takfiri terrorism tied to Al-Qaeda,” the foreign ministry said in a message to UN chief Ban Ki-moon.

It was the first time the Syrian government has appealed to the international body to take action against Riyadh.

“Saudi Arabia is not content to merely send weapons and to finance but also mobilises extremist terrorists and sends them to kill the Syrian people,” the Syrian message said.

Saudi ‘not to stand idle’

Muqdad on Thursday told AFP that “Saudi Arabia should be put on the list of countries supporting terrorism.”

Outside regime circles, there is also growing animosity towards Saudi Arabia.

Earlier this month, a film which depicts the Saudi royal family in an unflattering light was screened at the Damascus opera house.

“It was important for me to show this movie,” said director Najdat Anzour of his “The King of Sands” movie, which opens with Al-Qaeda’s 9/11 attacks on the US.

“Al-Qaeda didn’t come from Mars but from Saudi Arabia, from the Wahhabi, extremist way of thinking,” Anzour told AFP.

Najdat Anzo: “Saudi authorities is responsible of any attack against me”

Najdat Anzor , the director of the shocking film “the King of the Sand”, responds on the fatwa of a Saudi preacher that permits killing him under the charge of directing the film that talks about the biography of Abd al-Aziz Al Saud the founder of the Saudi Arabia Kingdom.

The director Anzor has issued a statement, obtained by Breaking News Network, in which he says that “a Saudi preacher called by Adnan al-Ayed has issued a fatwa that considers murdering him a necessary and lawful.

Anzor bears the Saudi authorities the responsibility of any attack against him or against the cast of his film.

Anzor says that the Saudi authorities are responsible before the Syrian and the international courts for any action that affects his personal safety or the safety of a member of his family or his team.

The Saudi preacher “Adnan al-Ayed” has issued through “Safa” a fatwa of killing the director Najdat Anzor.

The preacher has justified his fatwa claiming that Najdat Anzor insults the Islamic religion by attacking Al-Saud through his film.

Saudi Prince Talal bin Abdulaziz has told a friend to ask Syrian President Bashar al-Assad to prevent circulation of an anti-Saudi movie in his war-torn country.

Issuing a statement on his Twitter account, the Saudi Prince harshly criticized Syrian director of the ‘King of Sand”, Najdat Aznour, calling him “director of Jihad al-Nikah”.

King of the Sands tells the story of rise of the founder of Saudi kingdom, Ibn Saud, from an obscure tribal leader in Kuwait to the undisputed ruler of the Arabian peninsula.

The film depicts Ibn Saud as an unscrupulous, bloodthirsty womanizer who was a pawn of the British.

The film’s director has said that his intention was to expose the religious fanaticism that Ibn Saud promoted which – he says – is behind much modern day terrorism.

Prince Talal said the movie was not a successful work and “it will be thrown in the rubbish bin of art works”.

He wrote that he has asked a friend to talk to President Assad and persuade him to ban the movie in Syria which has been suffering from a deadly insurgency that Riyadh happens to be one its strongest supporters.

Saudi prince wrote that he hoped “for all the favors Abdul Aziz Al Saud has done for Syria and the Syrian government and nations can’t ever forget,” Bashar Assad orders banning the movie.

In an interview with Lebanese Al Akhbar daily on November 30th, Assad said the whole war in Syria could end if Saudi Arabia stopped arming and supporting militants who poured to the country following 2013 pro-reform protests.

Saudi Arabia, along with Qatar and Turkey have been strongest supporters of the war in Syria with Riyadh and Doha spending billions of dollars to support militants.

Saudi Prince Bandar bin Sultan, who is Director General of the Saudi Intelligence Agency has been referred by many as a one of the main figures leading the war against Syria.

Nearly three years of crisis has taken its toll on the lives of around 126,000 people in Syria, according to new statistics compiled by the United Nations. Millions have also been displaced due to the turmoil.

Why Is Saudi Arabia Buying 15,000 U.S. Anti-Tank Missiles for a War It Will Never Fight?

11 thoughts on “Syria Views Saudi Arabia As Enemy No.1: “Al-Qaeda didn’t come from Mars but from Saudi Arabia, from the Wahhabi, extremist way of thinking””