Christmas celebrations in Syria this year were restricted to prayers and masses in honor of the martyrs who scarified their souls for the safety of the homeland and as the country encounters terrorism.

At the Mariamate Cathedral of Damascus, a mass was held, led by Patriarch yahanna X Yazaji of Antioch and All the East for Rome Orthodox who talked about the noble meanings of Christmas. 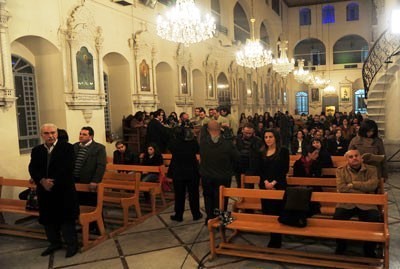 He prayed to God that peace would prevail in Syria, protect President Bashar al-Assad and the army, Syria children, hoping the abducted nuns of Maaloula and the two bishops in Aleppo would be released.

At the Cathedral of Notre Dame of Dormition in al-Zaitoun alley in Damascus, another mass was held, led by Patriarch Josef al-Absi of Antioch and all the East for Rome Catholic.

In his sermon, the Patriarch called for reconciliation in Syria, saying “we are in need to be Syrians, as nationality is our nature and originality.”

He also prayed to God to keep Syria, make it prosperous and protect the President and the army.