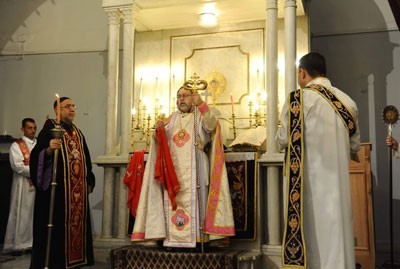 In deference to the current circumstances in Syria, Christmas celebrations were limited to holding mass and prayers in churches and places of worship across the country.

In St. George Cathedral in Damascus, Archbishops Jean Qawaq and Matthew al-Khuory, and Archbishop al-Khory recited a message from Syriac Orthodox Patriarch of Antioch and All the East and Supreme Head of the Universal Syriac Orthodox Church, Ignatius Zakka I Iwas.

In his message, Patriarch Iwas reaffirmed that Syria is the eternal home of Syriacs, reiterating calls for resolving the crisis via dialogue and political solutions and stressing that Syria’s Muslims and Christians share a single destiny.

He called upon the countries that will participate in the “Geneva 2” conference to cease their support for terrorists who are bound to turn against them one day.

Patriarch Iwas reiterated calls for releasing Bishops John Ibrahim and Paul Yazigi and the nuns of St. Thecla Convent who were abducted by terrorists.

Patriarch Iwas concluded his message by offering season’s greetings to President Bashar al-Assad and the Syrian people and praying for Syria and its martyrs. 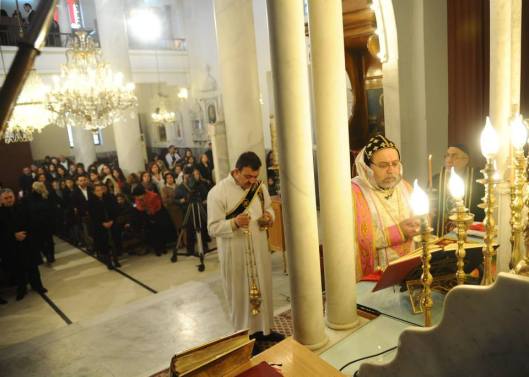 In the National Evangelical Church in Damascus, Pastor Peter Zaour headed the mass in which he prayed for the cessation of bloodshed and the restoration of stability and security to Syria.

Pastor Zaour called upon Syrians to stand fast in the face of the conspiracy targeting them and their land and to put their faith in God, parying for the abducted bishops and nuns and all other abductees.

He prayed to God to bless President Bashar al-Assad and grant him health, concluding by stressing that the conspiracy seeking to destroy Syria is doomed to fail.

Mass was also held in St. Elias Church in al-Duwaila’a neighborhood, headed by Archbishop Luca al-Khoury who prayed for stability in Syria for it to defeat the outsiders who target it by adhering to righteousness, faith and Arabism.

In Sweida, the Greek Orthodox Patriarchate of Bosra, Hauran, Jabal al-Arab and the Golan held  mass, with patriarch Saba Esper stressing that the Christmas this year coincides comes at a time when pain grips people’s hearts over what is taking place in Syria and the massacres committed by terrorism.

In turn, Archdiocese of Bosra and Horan and Jabal al-Arab to the Melkite Catholics also held mass on the occasion, in which Archbishop Paul Barkhash said that “We are in desperate need to enhance love among the people of our country and to denounce fanaticism and extremism.”

The Church of the Good Shepherd in Sweida also held a mass on the occasion in which Pastor Sameh al-Sada called for prayers for the protection of Syria from all evils and conspiracies plotted against it.

In Idleb, the Virgin Mary Church held mass in which Father Ibrahim Farah prayed for peace and security to prevail in Syria.

In Homs, a mass was held at the Savior Monastery led by Father Abdullah Qumus who stressed the sublime significance of Christmas, wishing that peace and security would be restored to the homeland.

For his part, Father Ziad Hilal pointed out to the fraternity and tolerance binding the hearts of the Syrians so that they managed to withstand the crisis.

In Hasaka, the Christian denominations performed prayers and supplications on the occasion of Christmas wishing peace, tolerance and amity prevail in Syria.

On Christmas, a number of Syrian soldiers honored in Damascus

Damascus, (SANA) – On the occasion of Christmas, the organization of “Loyalty to My Dignity, Syria” honored a number of Syrian army soldiers in a number of military checkpoints in Damascus on Wednesday.

Members of the organization expressed their appreciation for the sacrifices provided by the soldiers as to defend the homeland, hoping that safety will be restored to Syria and all displaced persons will return to their houses. 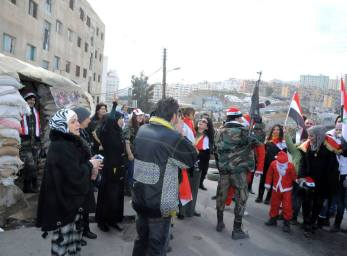 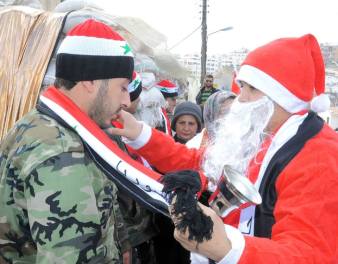 For their part, the soldiers expressed their readiness to defend their country regardless of the price, adding that they will always carry out their duties as to preserve the unity and security of the homeland.

Takfiri terrorists have killed 37 Iraqis on Christmas day, 26 at Chaldean Church in Baghdad

Baghdad – At least 37 people were killed and 59 others were injured in two terrorist blasts in the Iraqi capital city of Baghdad on Wednesday. 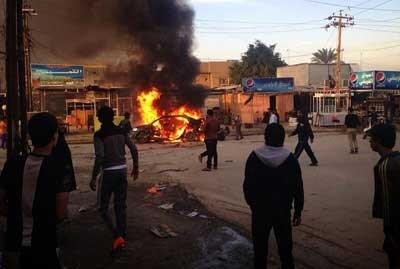 26 people were killed and more than 38 others were injured in a car bomb which targeted people taking part in Christmas mass prayers at the St. John Chaldean Church in Baghdad, a police source told Reuters.

Meanwhile, two bombs were detonated in a crowded market, causing the death of 11 people and the injury of 21 others.

6 thoughts on “Christmas Mass held in churches across Syria and a number of Syrian soldiers honored in Damascus ~ Takfiri terrorists have killed 37 Iraqis on Christmas day, 26 at Chaldean Church in Baghdad”