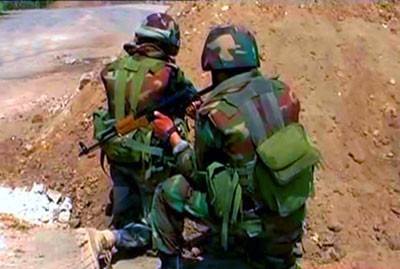 The army units eliminated non-Syrian terrorists in several areas in Damascus Countryside and destroyed their weaponry and munitions.

A military source told SANA that the army ambushed and killed dozens of terrorists affiliated to Jabhet al-Nusra between the areas of Maaloula and al-Qastal.

SANA reporter said that 80 terrorists were killed and dozens others were injured, adding that many of the killed terrorists were of Egyptian, Saudi, Libyan and Pakistani nationalities.

Terrorists al-Hussayni Mohammad Fathallah Ibrahim Hamad, Ibrahim Hamdi Abu Naja Hajras, Ibrahim Ali Madkour and Ibrahim Arafah Mohammad al-Naqeeb, all of them of the Egyptian nationality, were identified among the dead along with terrorists Waseem Bakeer and Maysan Asaad Rashed.

Meanwhile, A military source said that the army units eliminated dozens of terrorists in the Eastern al-Ghouta in Damascus Countryside.

An army unit clashed with terrorists in the city of Douma and killed a number of them, among the killed terrorists were Mahdi al-Anzi and Saleem al-Shummari, of the Saudi nationality.

Two vehicles loaded with weapons and ammunition were destroyed in the area of al-Hajaryeh and scores of terrorists were killed in El’ab Farms, among them 4 terrorists of non-Syrian nationalities.

The army targeted a terrorists’ hideout and killed a number of terrorists in the den in the area of Erbeen.

The army units clashed with terrorists in the areas of Joubar and al-Qaboun, killing and injuring many terrorists and destroying their weaponry. A 3-meters-deep tunnel equipped with lighting and ventilation were discovered in the neighborhood of Barzeh.

Units of the armed forces carried out operations against terrorists’ dens and gatherings in several areas of Homs, killing and injuring scores of them, in addition to destroying their weapons and ammunition.

A military source told SANA that the army destroyed a warehouse containing rockets, rocket launchers, vehicles equipped with heavy machineguns and a number of vehicles that are used to transport terrorists in the area of al-Dar al-Kabera.

A number of terrorists affiliated to the terrorist organization of the “Islamic State in Iraq and Sham” were killed, among them was Mohammad Jadaan, leader of a terrorist group.

The army also killed 14 terrorists and injured others in the area of al-Rastan. Terrorists Rafe Saad Eddin and Jamal Obeid were identified among the dead.

Citizens injured in explosion of IED in residential district in Homs

A number of citizens, including two children, were wounded in explosion of an explosive device while an the armed terrorist group was preparing it inside a shop in a residential gathering in Homs.

A source told SANA that the explosion killed and wounded a number of terrorists. Leader of the terrorist group Bassam Ahmad Al-Mohammad was among the killed.

Three terrorists also were killed due to the explosion of a rocket they were trying to fire it in al-S’an town to target the neighboring villages and towns. Four others terrorists were killed at the hands of the army units in the town.

The source noted that terrorist’s dens and gatherings were destroyed in Bab Hud neighborhood and in villages and towns of Kissin, Taldo and al-Ghasbieh, al-Wabeda and Habra.

The army units continue operation against the terrorist groups in the province of Idleb, killing scores of terrorists and destroying their equipment.

A military source told SANA that the army targeted and destroyed terrorists’ hideouts in the areas of al-Bashiryeh, Qastoun, Marteen, Jdar Bakfaloun and Abu al-Dohour, killing a number of terrorists and destroying their weaponry.

The army destroyed terrorists’ hideouts and weapons warehouses along with vehicles equipped with heavy machineguns in Maarat al-Numan, killing a number of terrorists, among them were Sheikh Barakat of the Moroccan nationality, Mamdouh al-Taweel of the Tunisian nationality, Said Matar of the Jordanian nationality, along with terrorists Mustafa Said al-Sheikh, THabet Mohammad Mahmoud, Mohammad Khadeja, Jihad al-Baik and Omar Ahmad al-Khaled.

The source added that the army also targeted two terrorist groups in Jisr al-Shughour and killed all of their members, among them were Nader Qarmo and Ra’ed Qarmo.

A military source said that the army pursued and killed scores of terrorists in the town of Zimreen in Daraa countryside and destroyed terrorists’ hideouts in Um al-Awsaj.

The source said that another unit eliminated a number of terrorists and arrested others had tried to infiltrate into Hama across Sher al-Jerajmeh road and confiscated a large quantity of weapons and stolen medicine in their possession.

Terrorists Mohammed Hassani and Moris were identified among the dead.

An army unit destroyed a terrorist hideout in the village of al-Rihaniye in Lattakia countryside, eliminating 32 terrorist including 9 group leaders, among them a Saudi called Abu Suhaim al-Qusaibi, and two Turks, one of them nicknamed Abu Abdullah and Abdelrahman Talak.